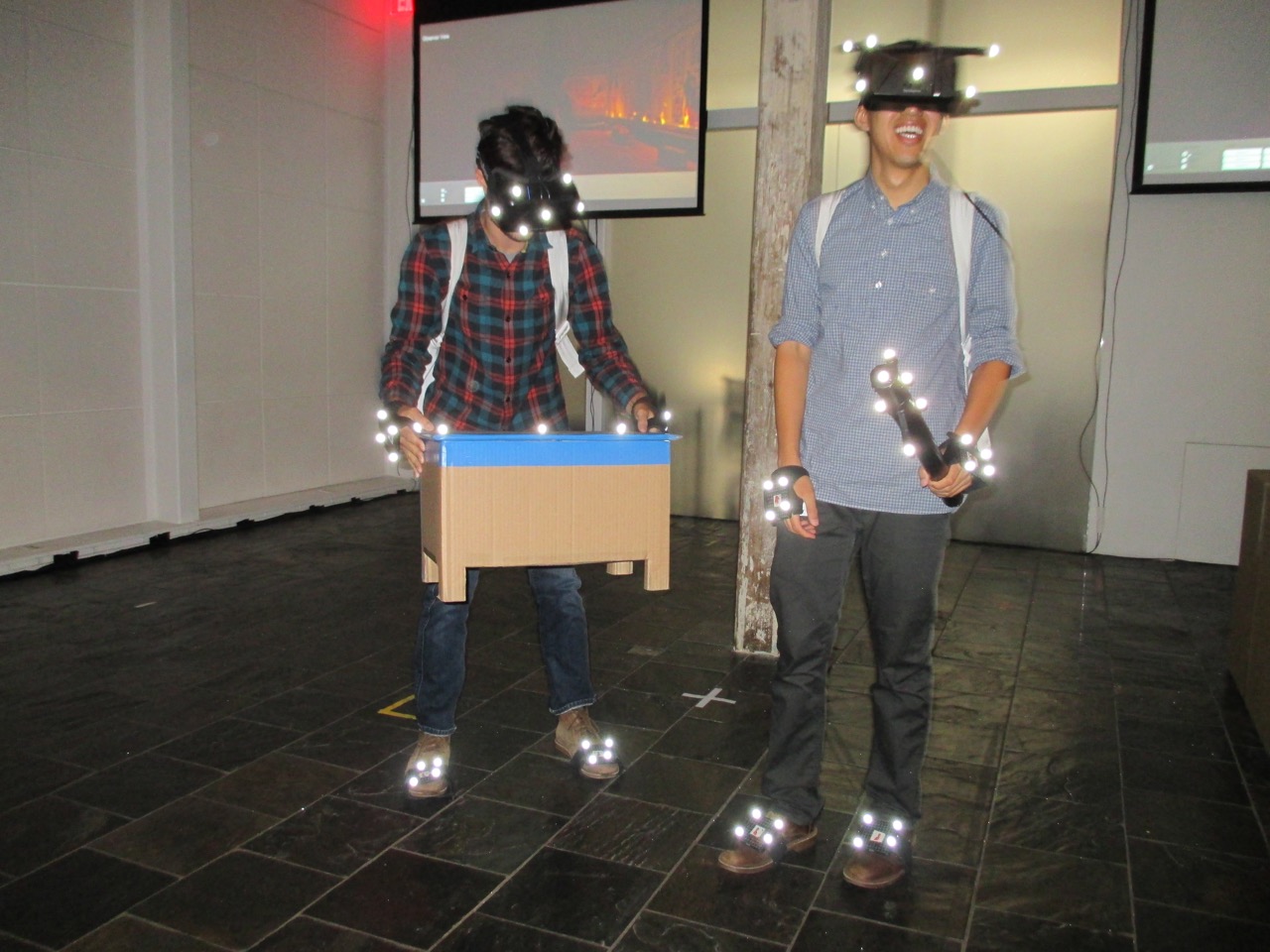 Last Friday, some folks from the education and visualization sections of the California Academy of Sciences got to play with some neat virtual reality prototypes at the offices of Swissnex San Francisco. Entitled "Real Virtuality," this interactive exhibit focused on three VR simulations created by the Geneva-based foundation Artanim. As someone who has been following virtual reality simulations for many years, it was neat seeing where the field is at.

We experienced three different simulations: "Walking through a Pharoah's tomb,"Prepare to be aMazed!", and "a ballet from the inside."

To experience the simulations, you and a partner strap on an Occulus rift VR viewer, a light backpack, and two pairs of sensors strapped to your hands and feet. The simulations took place in a small, empty room, with one pillar and a couple of cardboard boxes. 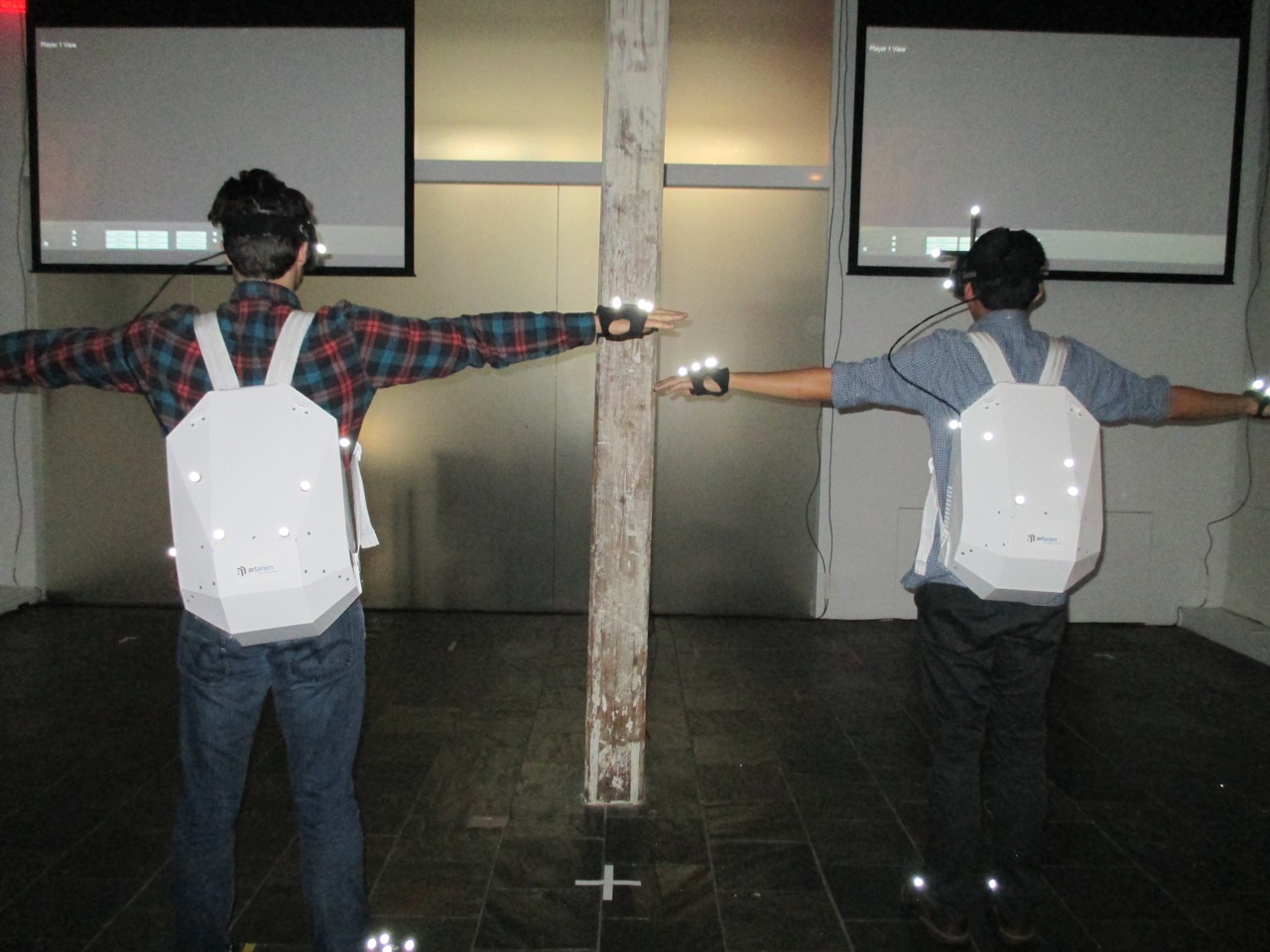 My colleague Katie and I were assisted into the VR gear by simulation developers Sylvain Chague and Caecilia Charbonnier, both from Geneva. It took a minute to get on the gear and callibrate it to the software. But once you lowered the viewer over your eyes, you were transported to an Egyptian tomb!

The level of verisimilitude was pretty impressive, with no perceivable latency between what we were seeing and our head and body movements. It's that lag between the movement of your head and what your eyes see that causes most experiences of dizziness and motion sickness in VR simulations. But I didn't feel any discomfort.

So you can move around in the physical space and have mapped onto the viewer a pretty detailed simulation of an ancient tomb. There are lighting effects, shadows, and animated sections. The pillar in the middle of room perfectly lines up with a simulated pillar in the tomb.

And because you and your partner are both being tracked in the space, you can see each other's avatars, which in this case were male and female Lara Croft / Indiana Jones type adventurers. You can reach out and touch each other, with only a slight overlap of your hands.

But the neatest part was being able to interact with physical objects in the space. A short stick in this simulation becomes a lighted torch that illuminates whatever is near it. A small cardboard box is shown as a tiny, ornate chest that you can pick up and examine. The larger box becomes a tomb. As you pass your hand over the top, it magically dissolves to reveal the Pharoah inside, as music swells around you.

Here's a video showing two people in the tomb simulation together.

A few clicks of a mouse, and we are transported into a dark maze, familiar to anyone who has played any FPS. There are simulated walls, with spiders crawling up and down them, open pits, narrow tunnels that you have to sidle or stoop to enter, and spikes in the floor that you have to try and avoid (or not, there's no dying in this simulation.) It's a lot of fun, particularly because you get to do it together with a partner. 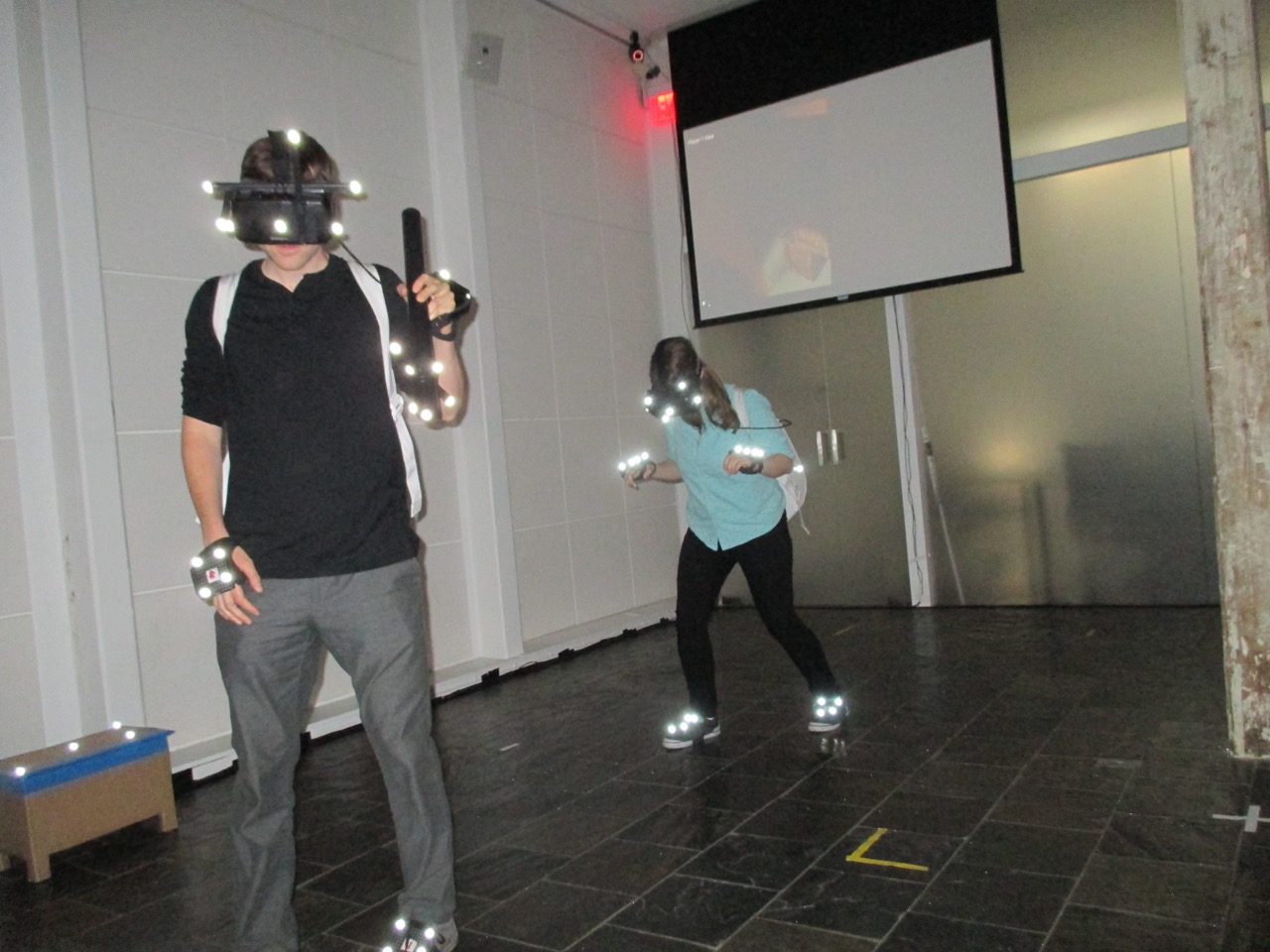 Finally, you are teleported into an open air dance performance, featuring a couple doing a modern ballet together. 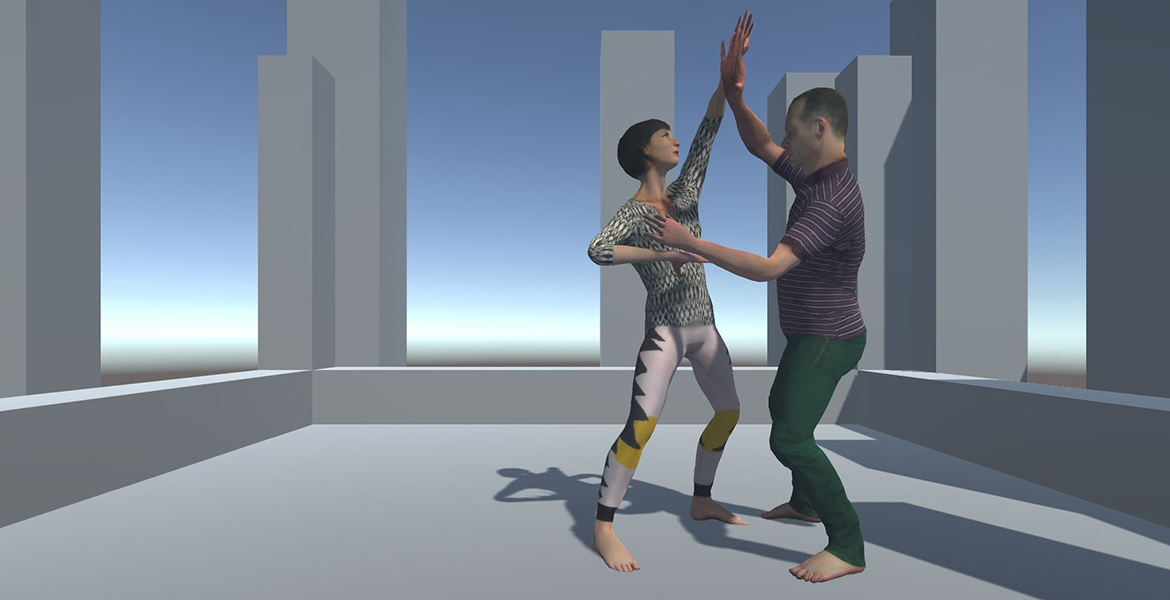 After being in a couple of cramped interior spaces, it's neat being outdoors, with a blue sky all around you on a floating platform. As someone who watches a lot of dance both on video and in person, this was a very unique way to experience a dance performance. You can walk all around them and even through them as they move.

Overall, I thought these were really fascinating prototypes, showing what is possible with VR using current tech. It's not quite "Snow Crash" or "The Matrix," but it's definitely getting closer.

The social aspect of being able to experience a simulation with another person was probably my favorite part. Working in a science museum, it's that shared social experience that makes what we do so much more impactful than watching a video or even manipulating a 3d model. If we can simulate Pharoah's tomb, we can simulate going to a Philippine rainforest as scientists to collect insect specimens, or shrinking down to micro-scale to witness the exchange of molecules between fungi and tree roots, or flying to Mars to explore the surface with the Curiosity rover. There's so much potential out there, and it's not far off!

Check out this episode of "Tested" that focuses on "real virtuality" with more technical details on how the developers created these simulations.

Swissnex SF is a project of the Swiss foreign affairs department, that aims to connect Swiss and North American initiatives focused on science, education, art and innovation. Thanks so much to Swissnex SF for giving us the opportunity to check out this exhibit!