Why are these bison so gassy? What's hurting the chestnut trees? What's turning the coral white? In MicroRangers, a new augmented reality game at the American Museum of Natural History, you get to shrink down to the microscopic-level to investigate these mysteries and more.

On Monday, I got to try out MicroRangers for the first time, during a last-minute visit to New York. Anyone can play for free (after admission to the museum.) All you have to do is download the app to your smartphone and get a free MicroRangers postcard found in the Hall of Biodiversity. Hold your phone up to the postcard and a cheerful single-celled avatar appears and welcomes you to the game.

There are nine "missions" available to play, covering science topics related to terrestrial animals, plants, and marine life. Each of them is introduced by a tiny virtual scientist, who challenges you to investigate some problem facing the plant or animal. 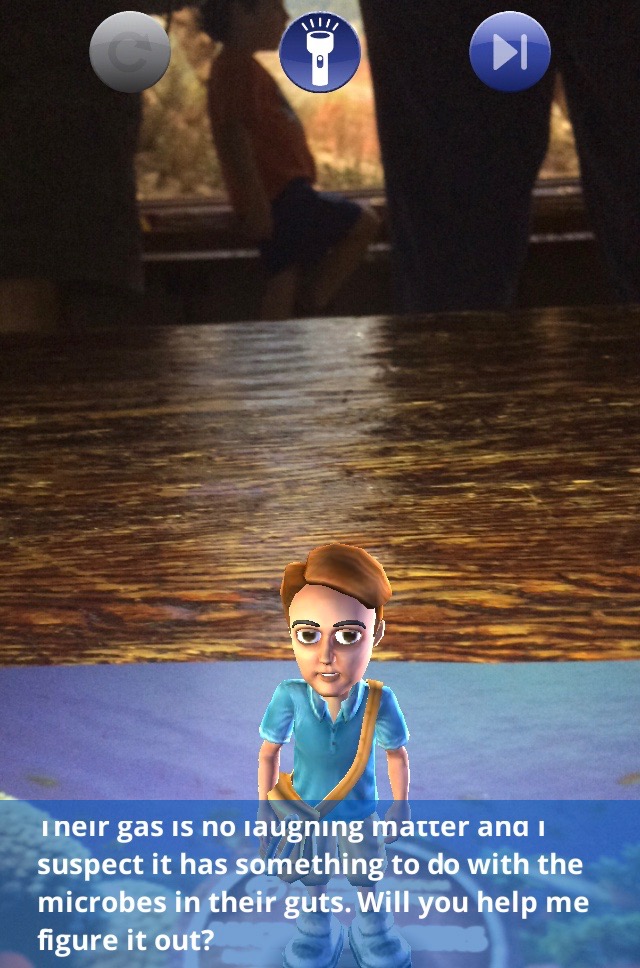 I did three of the missions, which got me exploring the museum, checking out displays and dioramas that I probably would not have paid much attention to otherwise, and engaging in virtual scavenger hunts and games. Game play was pretty smooth and intuitive, although I had to linger or double-back to certain spots before the game realized I was where I was supposed to be. That is apparently a huge challenge with augmented reality games in museums — accurately locating the player amidst the dense collections, displays and crowds. But MicroRangers worked much better than I expected.

Check out a walkthrough of another MicroRangers mission led by my friend Barry Joseph.

In the age of PokemonGo, MicroRangers shows how museums and other informal learning institutions can adapt to create AR experiences that entertain, educate and inspire the visitor. It's easy to view peoples smartphone addiction as taking away from the "true" museum experience. But perhaps its a matter of meeting the visitor where they are and creating experiences that use their devices to better connect them to the collections and exhibits and extend their learning.

Personally, I can't wait to go back to AMNH to figure out what pollution is doing to the bioluminescent photobacteria that live in deep sea squid. MicroRangers, go!