Skip to content (Press Enter)
The Association of Science-Technology Centers (ASTC) Conference is one of my industry’s main gatherings of the year. It brings together more than 1,500 museum and science center professionals from hundreds of institutions from around the country and the world. This year it was held from October 18-21 in lovely Raleigh, North Carolina.
It’s always fun and stimulating being at ASTC, among my peers and associated professionals. I mean how can you not love a conference that begins with an awesome youth marching band?
This year felt especially energetic, positive and forward-looking overall. The exhibit hall felt fuller and more active than past years. The keynotes were well attended. And the host museum seemed to really bring their “A” game during the main party and other activities they sponsored.
The 2014 ASTC was the most active year ever for my youth programs team from the California Academy of Sciences. The Academy sent five of our youth program staff to Raleigh, two of our youth volunteers, along with representatives of our planetarium, exhibits and public programs. My team’s main contribution to ASTC was organizing and presenting at five sessions in Raleigh:
The first two were sessions that I helped organize and presented at.
The highlight for me was getting to bring a couple of our Digital Learning TechTeens to ASTC, Zachary and Toby. Alumni of several different Digital Learning programs, Zach and Toby were perfect representatives of the kinds of teen leaders we want to foster in youth programs. I was excited to have them share what they had accomplished and learned with the larger informal science education community.
Zachary and Toby did a fantastic job at the two sessions they presented at. Their first session was on “Teen Gamemakers,” presenting alongside educators from the Field Museum and the Shedd Aquarium.  Zach and Toby had fun showing off the game that they helped develop, “Mission Fishin,” for the audience of 50+ participants. And they described well how they created their game and why.
Even more exciting was the “Youth-proof Your Program” session, a collaboration among the Cal Academy, the American Museum of Natural History and the North Carolina Museum of Natural Sciences. Zach and Toby were joined by four other youth from the other two organizations, forming a formidable panel of six smart and eloquent teens. Upon first meeting each other on Saturday at noon, they immediately started bonding and working well together. They agreed on the structure of their session, divided up tasks among themselves, and rehearsed the entire session together.
The purpose of the “Youth-proof Your Program” session was to offer museums and science centers an opportunity to “pitch” their digital youth programs to a panel of teens, who would ask questions and give their honest feedback on the programs. We had six brave adults agree to pitch to the teens and the audience.
The teens did a fantastic job running the session from beginning to end. They called up each of the presenters, asked great followup questions, and provided some valuable feedback and suggestions. It was refreshing for me to just be able to sit in the back of the room and see our teen leaders take charge. I couldn’t have been more proud of our youth.
Check out Barry Joseph’s more comprehensive write-up about the “Youth Proof Your Program” session on his blog.

I didn’t spend as much time in the exhibition hall as I had at previous ASTC’s. There was too much to do during the sessions and outside networking. But our teens got to cruise around the exhibit area, see cool new technologies, displays, and programs from vendors and museums from around the world. And of course they collected lots of swag — pens, sunglasses, bouncy balls, bags, and more.

A cool encounter was this fun “micropipette by numbers” art activity sponsored by the World Biotech Tour that my colleagues really enjoyed contributing to.  What a fun way to combine art and science! Apparently the organism being slowly painted was a plant hopper (Pyrops intricata) being studied by North Carolina biologist Julie Urban.
Maker Spaces continue to be a huge and growing trend among science centers and museums.  All of the making and tinkering sessions I attended were packed with enthusiastic attendees.

The most interesting making session was a debate between a making skeptic and three making enthusiasts. While the skeptic threw up a lot of straw man arguments against making, it did help me examine my own doubts and questions about making and science education.

I think the evidence is clear that maker spaces can foster the kinds of orientations toward science thinking that we should encourage: inquiry, investigation, forming hypotheses, testing, refinement, and sharing of findings. That said, making connections between making activities and deeper science explorations and pathways is not so obvious to me.  How do you move a kid beyond making a paper circuit toward more intensive science learning and engagements like “true” science experiments, researching and reading about a particular scientific phenomenon, and connecting with actual science practitioners? It’s that through-line that I’m not seeing yet.

In response to my question to the panel, I got a link to this curated list of research on making and learning that I am eager to dig through soon.

Another highlight of ASTC for me was getting to be in Raleigh, North Carolina, a small southern city that I knew very little about before. I was pleasantly surprised by what the city had to offer — a huge and impressive natural science museum, an energetic and cosmopolitan downtown area, great food offerings and a developed coffee culture, and nice, friendly folks wherever we went.
I would gladly return to Raleigh.  The barbecue alone would be worth it! 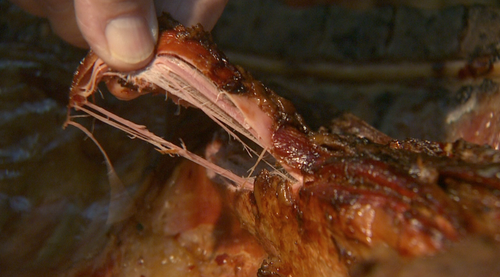 Overall, ASTC 2014 for a really great experience. I really want this to be the year that Cal Academy’s youth programs and Digital Learning program begin to get more public visibility and recognition for the work that we are doing with our teens.  ASTC 2014 was a big step forward for us, and I believe only the beginning of our impact on the field.
See more of my pictures from ASTC 2014 on Flickr.
Museums, Travel