The year two-thousand and fifteen was a HUGE one for the Digital Learning program at the California Academy of Sciences. We’ve had a lot of changes, pivots, sad goodbyes, and successes over the past twelve months that are important to acknowledge.

Over the summer, we bid a fond farewell to programs coordinator Christine Wilkinson. I’ve worked with Christine for most of my time at the Cal Academy. She’s been a co-conspirator, co-educator, and a good friend amidst lots of change and transitions in our work. All of us — adults and teens — miss Christine’s wacky energy, inexhaustible creativity, commitment to our youth, and deep science knowledge.  Christine is now in graduate school at UC Berkeley to pursue her PhD in Environmental Science, Policy, and Management, a long-time passion of hers. We’re so excited about what the future holds for her! 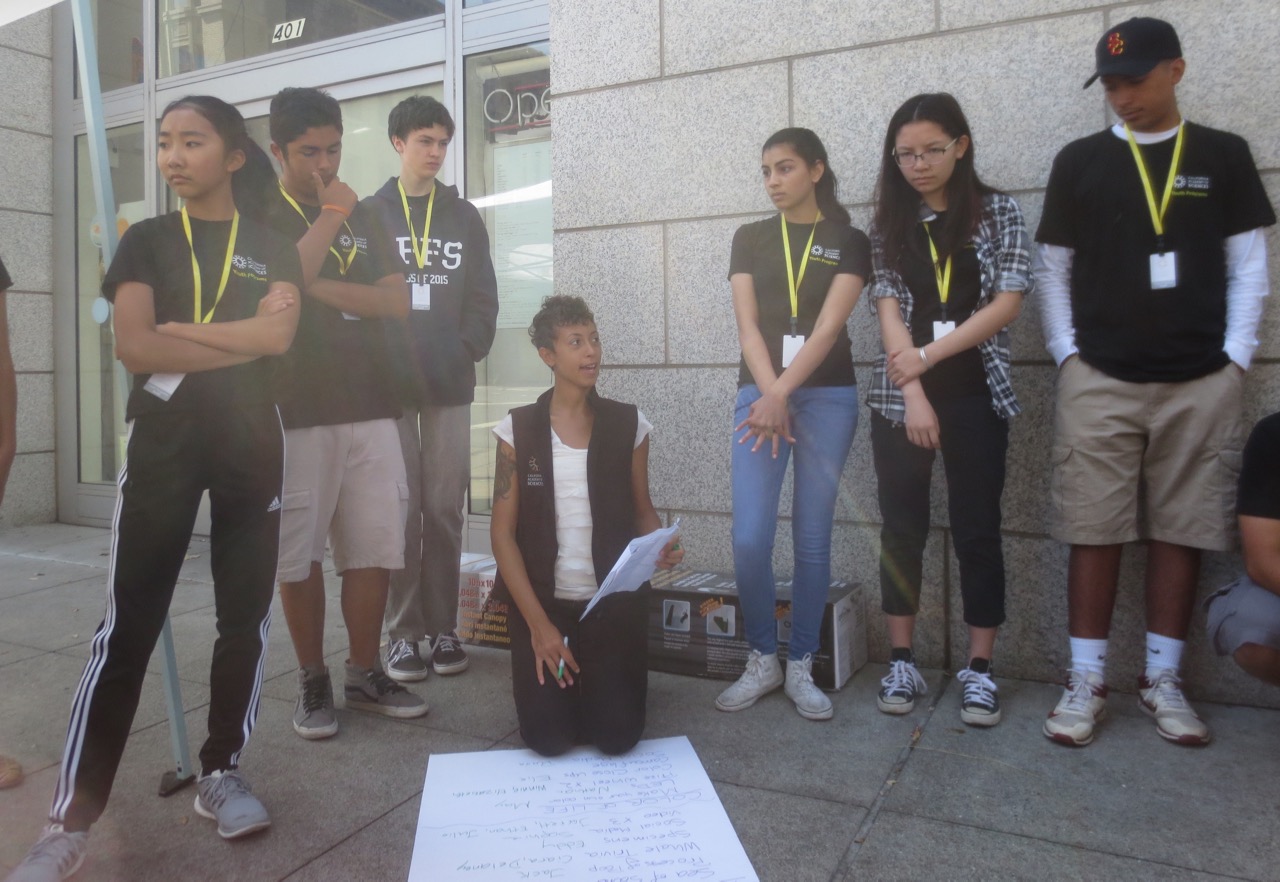 Speaking of team transitions, last December, we were happy to welcome Jeff Dam to the Digital Learning team. Jeff brings strong organizational skills, serious technical knowledge, fierce multi-task abilities and a calming presence. During the Fall semester, Jeff managed three different youth teams in three different programs, while also keeping up with his Digital Learning and youth programs responsibilities. We’re so lucky to have him on the team. 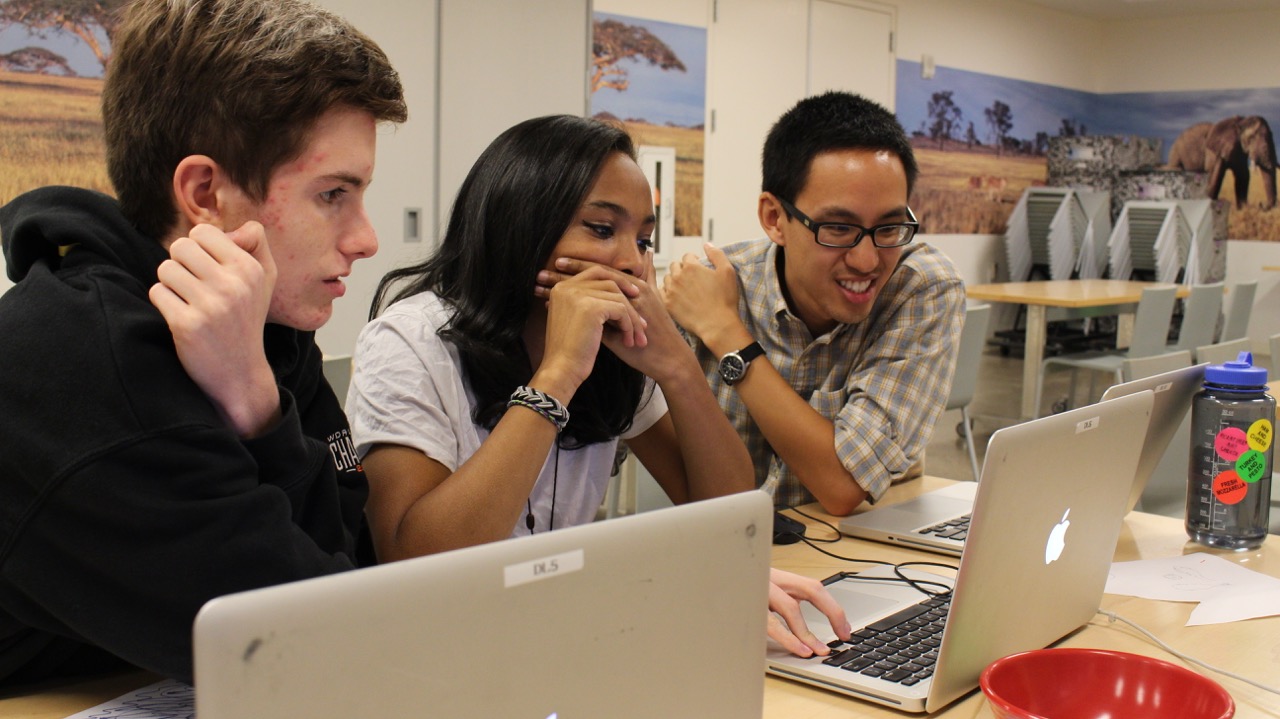 This year, the Digital Learning TechTeens continue to lead online discussions and debates about important science topics through our partnership with local public media outlet KQED. About once a month, the TechTeens would research a science issue and draft a blog post discussing the issue, weighing different pros and cons of the debate. Then classroom’s of teens around the country would discuss the topic and post to the blog or on Twitter their views on the issue. Over the past year, the TechTeens spurred conversations on such interesting topics as genetically modified pets, the California drought, and colonizing Mars.

It’s been great seeing our teens grow as science communicators and writers, while also refining their argumentation and analysis skills. And watching hundreds of teens and adults debating topics that our teens chose and curated is a huge thrill.

The Academy’s first Science Game Jam was held on April 26 at the museum, hosting 50 Bay Area teens who worked together to create game prototypes on the topic of whale ecology. It was an inspiring and exciting day as kids learned about whales and ocean ecology from various science experts, learned about game design from developers from Zynga, Roblox and Glasslab, created working game prototypes, tested them out with the visiting public, and presented their final game concepts to a panel of expert judges. 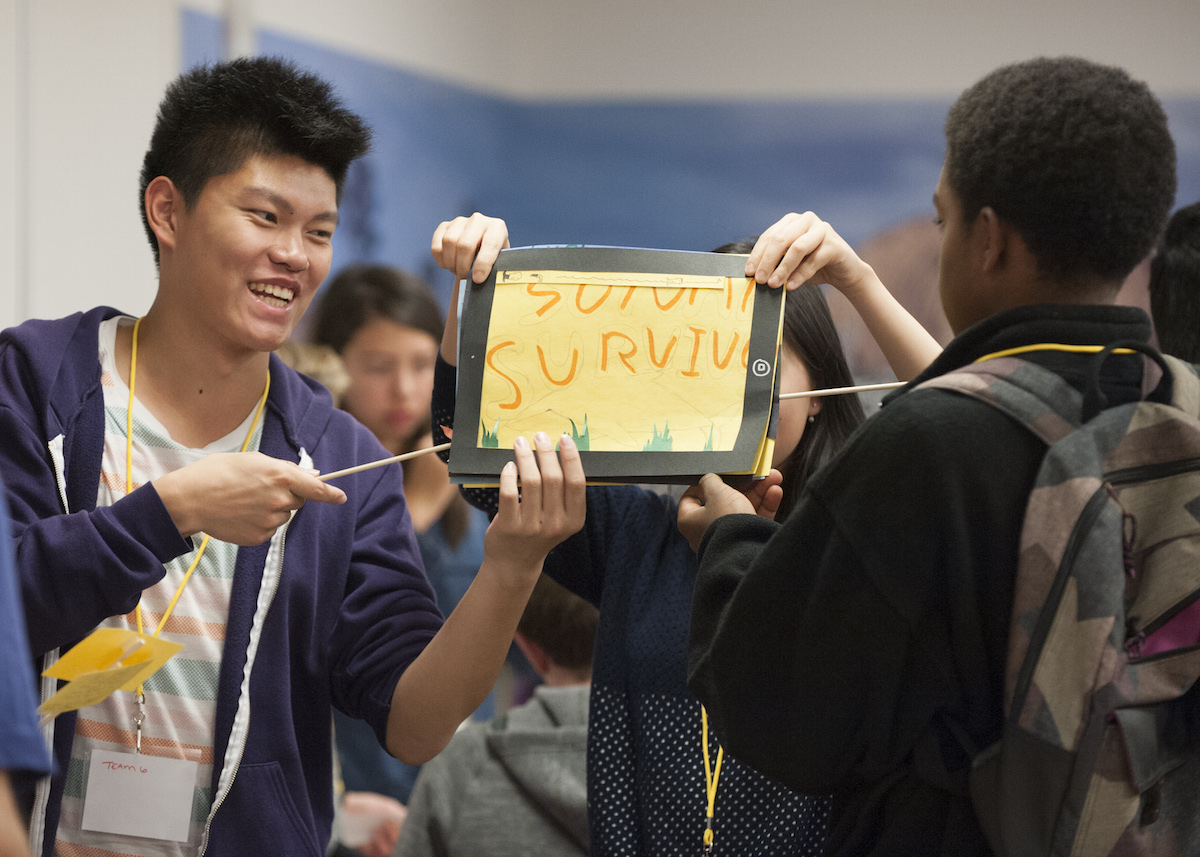 The Science Game Jam turned out to be excellent preparation for our biggest event of the year, the national Climate Game Jam!  A partnership with the White House, NOAA, Smithsonian, Polar Partnership, and several other organizations, the Climate Game Jam was a weekend long science game challenge that occurred October 2-4 at a dozen of sites around the country.

The Cal Academy was an anchor site on the West Coast, and the only jam site to focus on bringing together professional game developers. We assembled developers from a wide range of firms, from small indie start-ups to big guns like Unity, Google, and EA. It was a really fun weekend, and we ended up with six awesome game prototypes on different climate science topics. 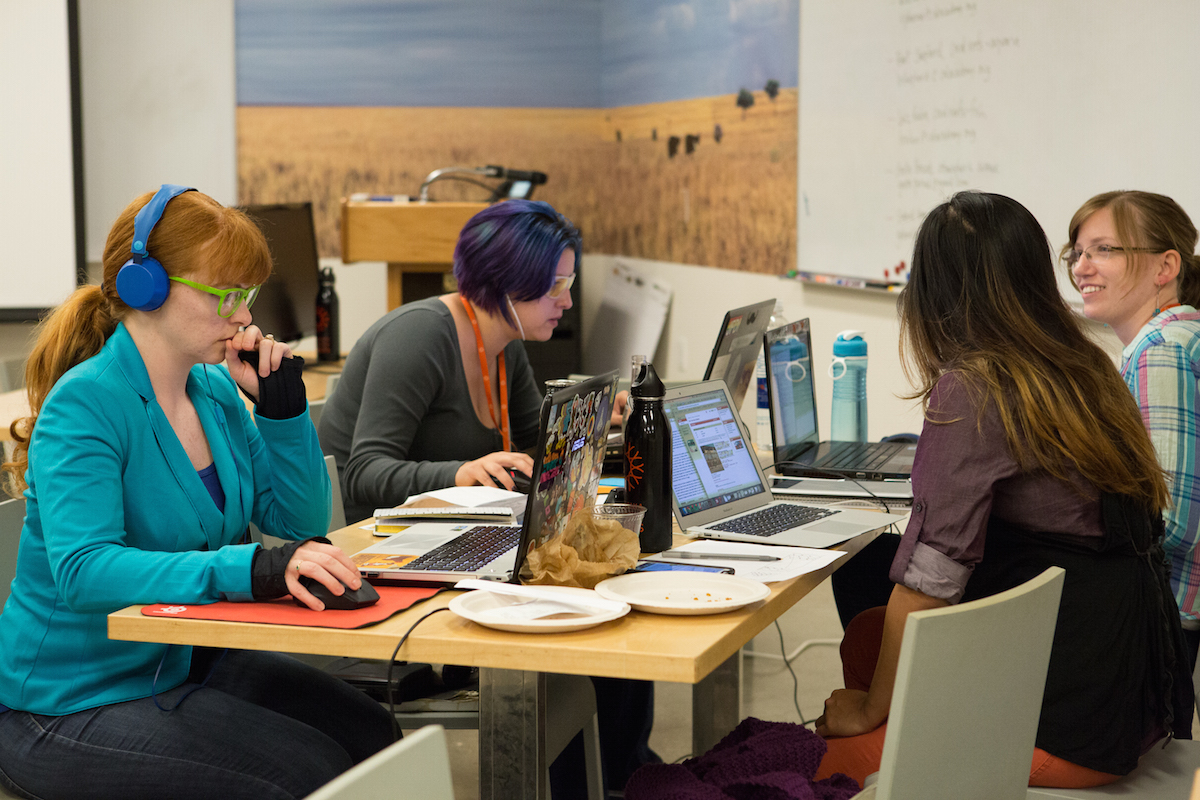 This year, we also assembled a team of teen game makers as part of our TechTeens program. The game team has already created a couple of cool whale-themed games in Scratch, run a mini-science game arcade, and are working on more complicated games using the Roblox game engine. Next year, the game team is going to help organize the 2016 Science Game Jam, which is going to be bigger and more ambitious than this years.

Plus we’ve got a secret game project that is dropping in early 2016!

Video creation continued to be an important part of the work of Digital Learning, but perhaps on the wane as we transitioned toward more game design.

The TechTeens visualization team created a number of fun videos on science subjects that they chose. They were tasked with creating videos that highlighted the museum and the work our youth community was involved in, including a Golden Gate Park bioblitz, the “zero waste” initiative in San Francisco, and this video on the AAAS Family Science Days that the TechTeens participated in.

We also continued to support a teen intern working alongside our Visualization Studio to help with various video projects. Viz studio interns Robert Shi and Toby Richkind got to learn how to use professional video editing tools, organize and manage media assets, edit and do post-production on some of our world-class videos, and even do their own video projects. Such a cool opportunity for a young person.

Lastly, we also got to highlight the voices of our young people in the new “Flipside Science” modules that we launched in the Fall of this year. Digital Learning TechTeens Madeleine and Darrah are two of the awesome hosts of these videos.

This Summer, we tried out a new kind of summer program, the “TechTeens Street Team.” We wanted to get our awesome teens out to the public – at our museum, at other like-minded institutions, and actually in the streets. It was quite a success and we definitely learned a lot from doing it.

We wanted the teens to be sharing out science that they learned, using interactives and games that they created, rather than just regurgitating talking points and content that we fed them. It was definitely a big challenge for our teens, particularly our middle school cohort, but they rose to the occasion, and I think learned more than if it was simply provided to them pre-packaged.

One of the most challenging but rewarding experiences was having our young TechTeens in the Tenderloin neighborhood, sharing science at a street fair. While there were certainly a wide assortment of folks coming by their booths, we also got a lot of appreciation and love from the locals who told us that they rarely got visited by cultural institutions like the Cal Academy. A good reminder about who our museum reaches and who it doesn’t. 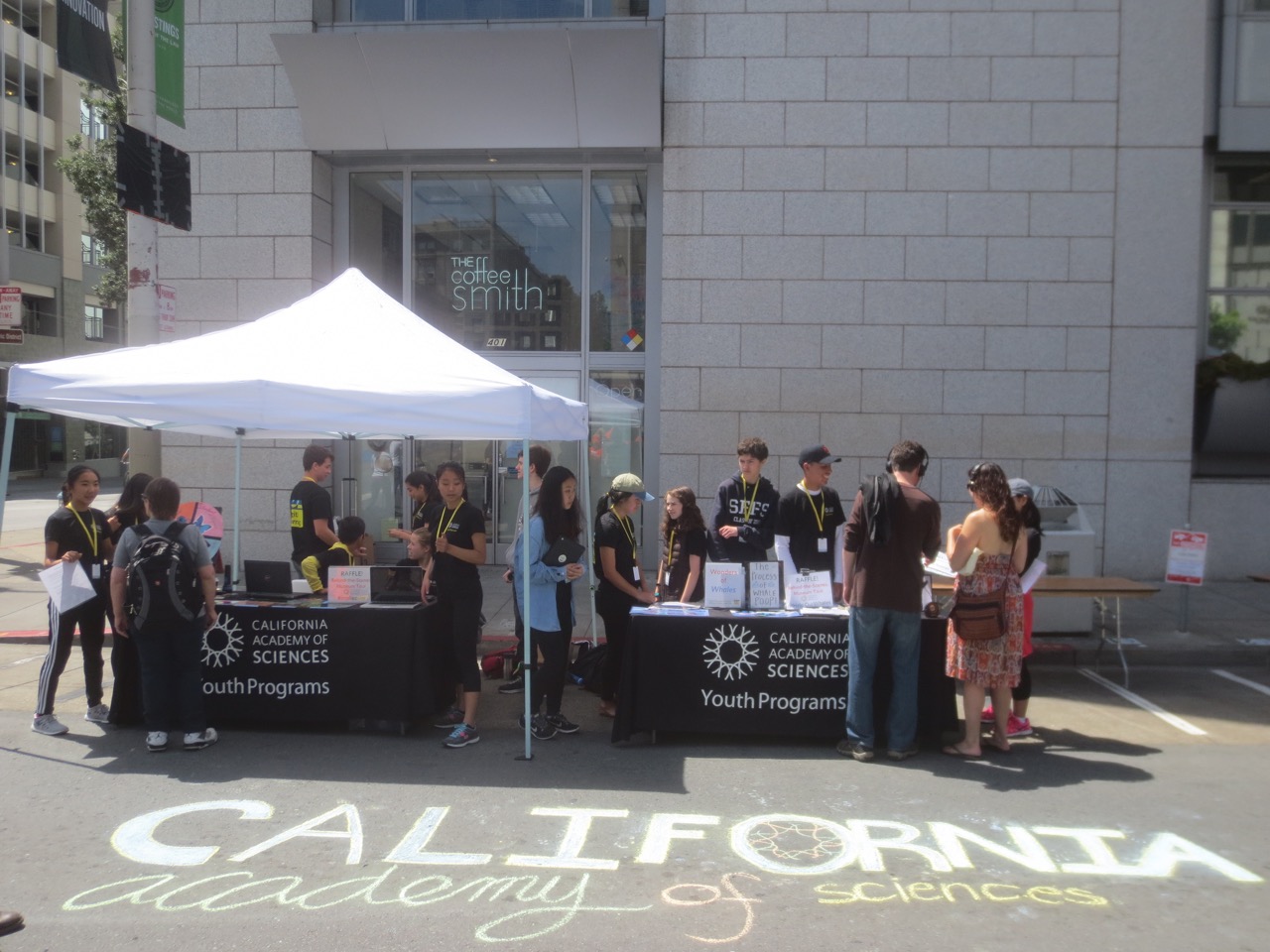 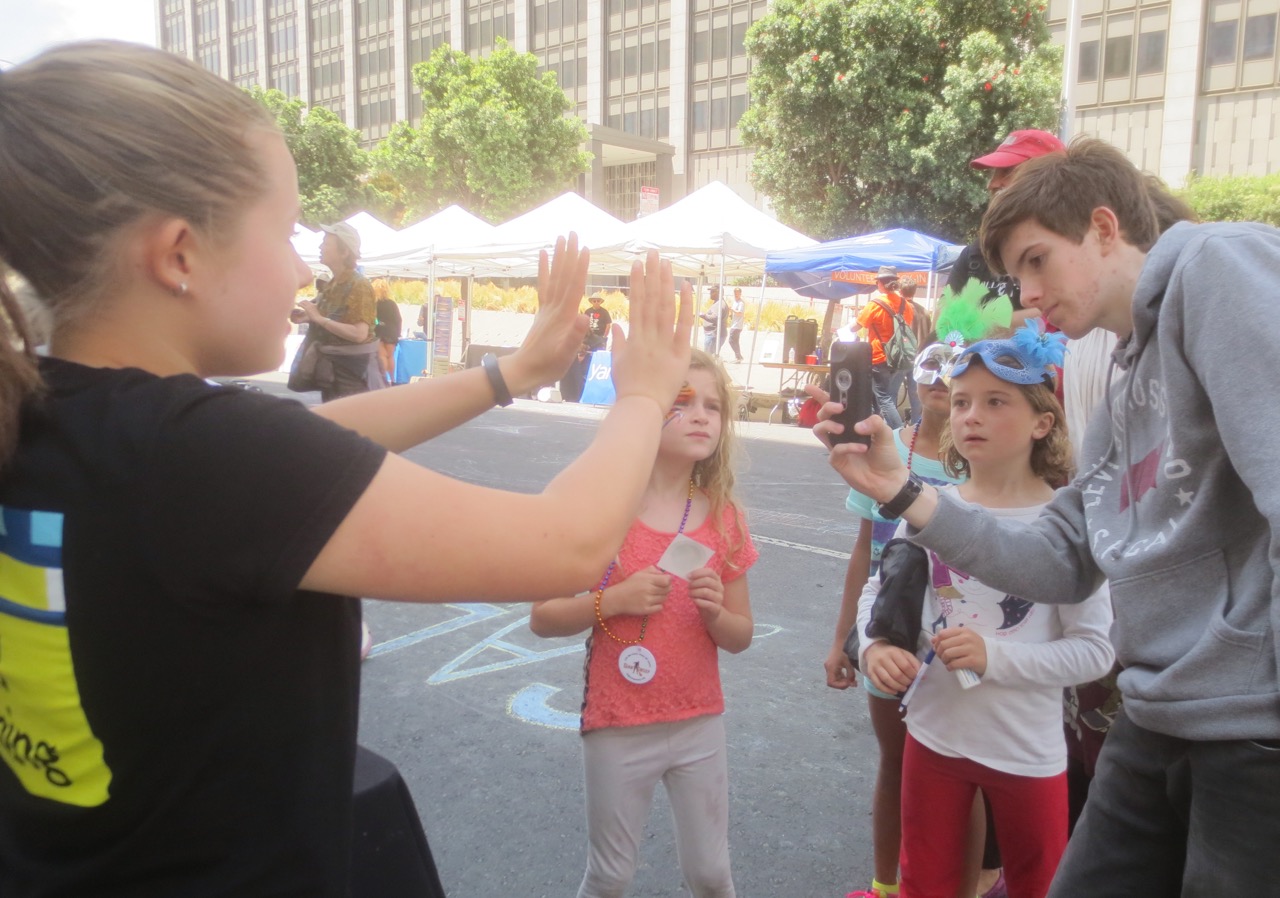 We also got to represent the Academy at the main branch of the San Francisco Public Library, which most of our teens had never visited. We learned a lot about the important role of public libraries in the community. 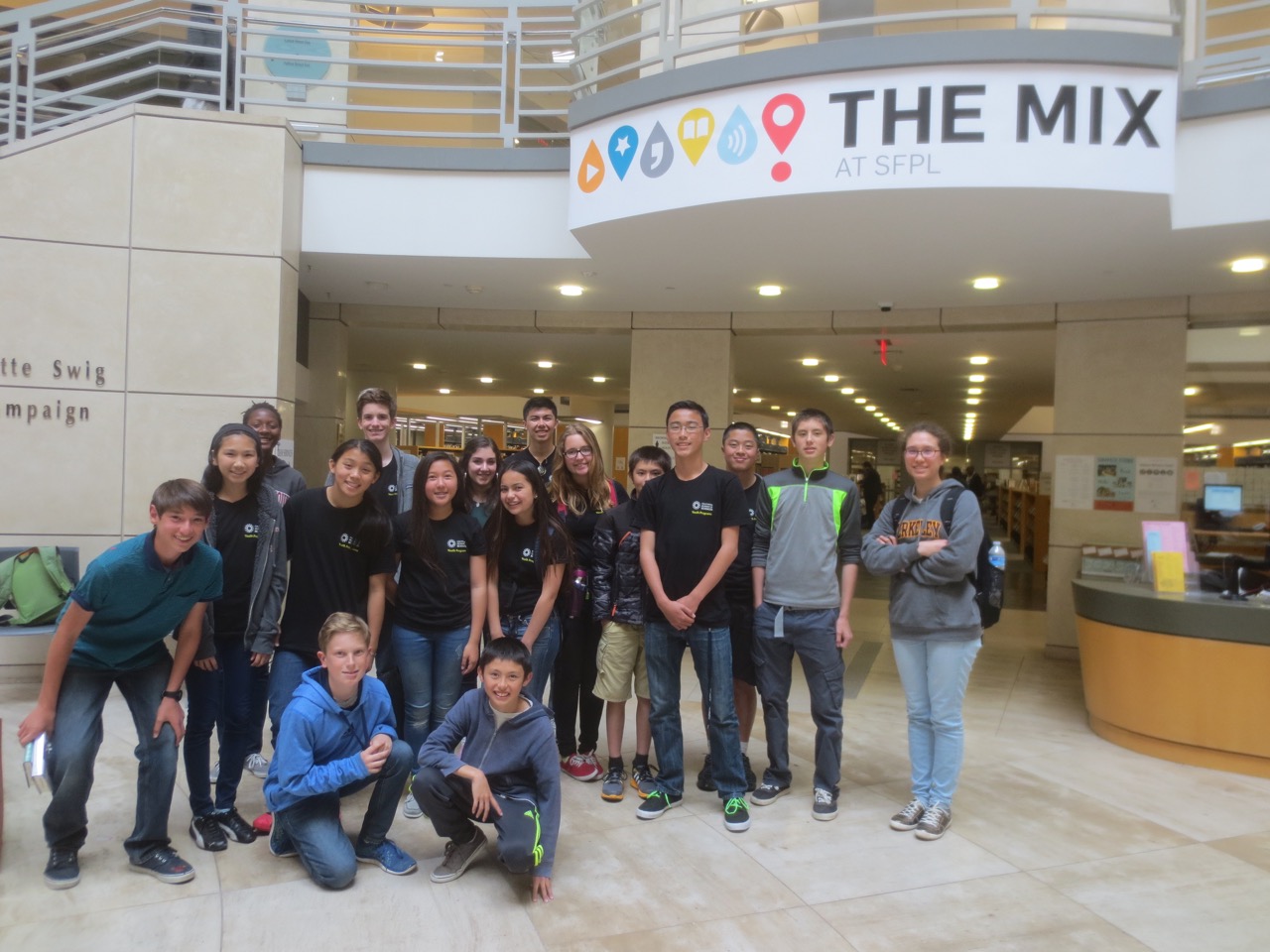 And of course the TechTeens joined our colleagues in the TASC Force and the Careers in Science interns in showcasing science on the public floor of the museum. 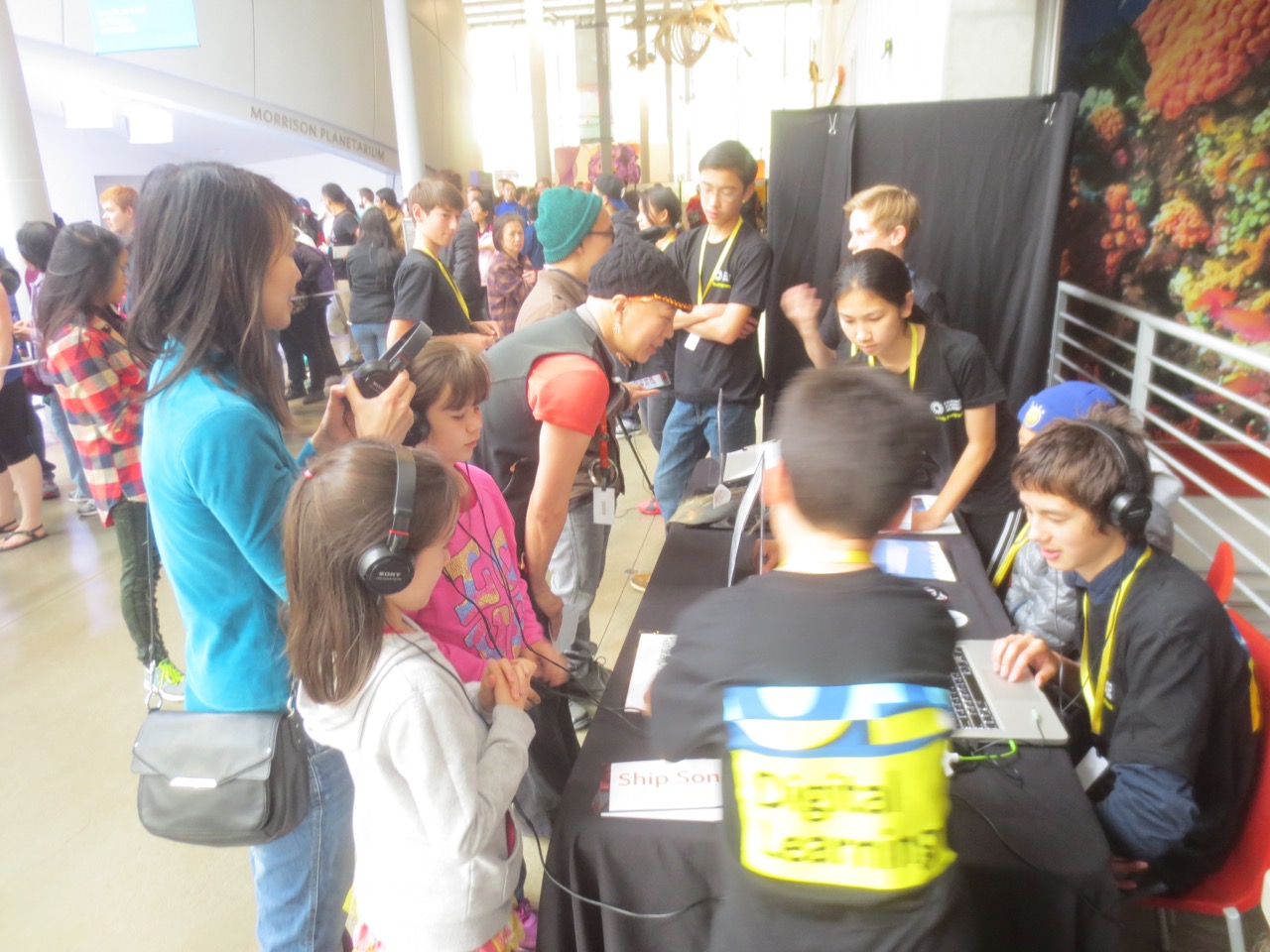 One of the biggest surprises of 2015 was that I got to accompany scientists into the field in May as part of the Verde Island Passage biodiversity expedition!  I was part of the education / outreach team, alongside Lindzy Bivens and Meg Burke, connecting with local Filipino communities where we were doing field research. 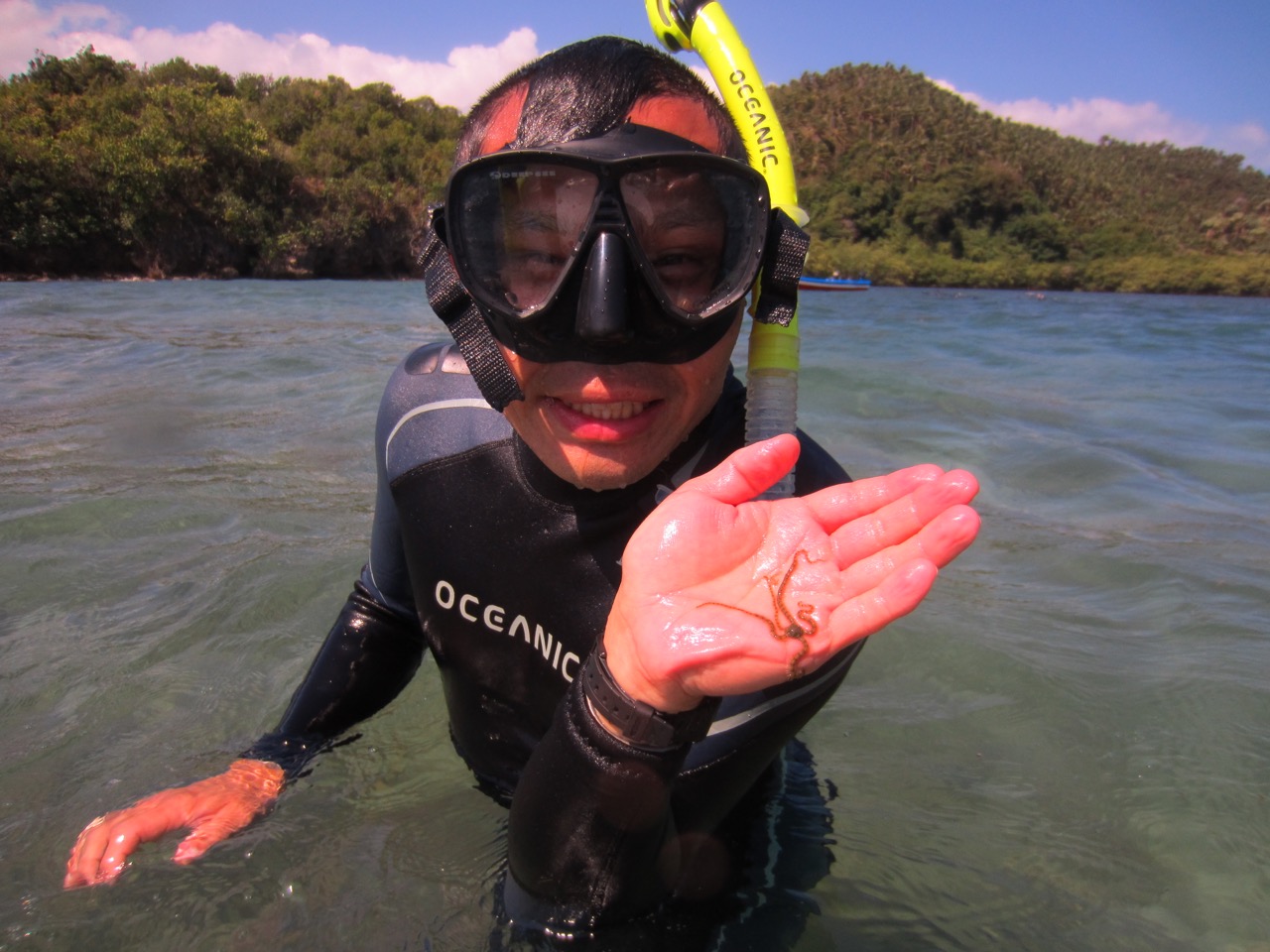 Getting to meet everyone from kids to teachers, government officials, town elders, and fisherfolk was a huge thrill. Seeing their faces light up as they learned about the amazing biodiversity around them was an experience I’ll never forget. 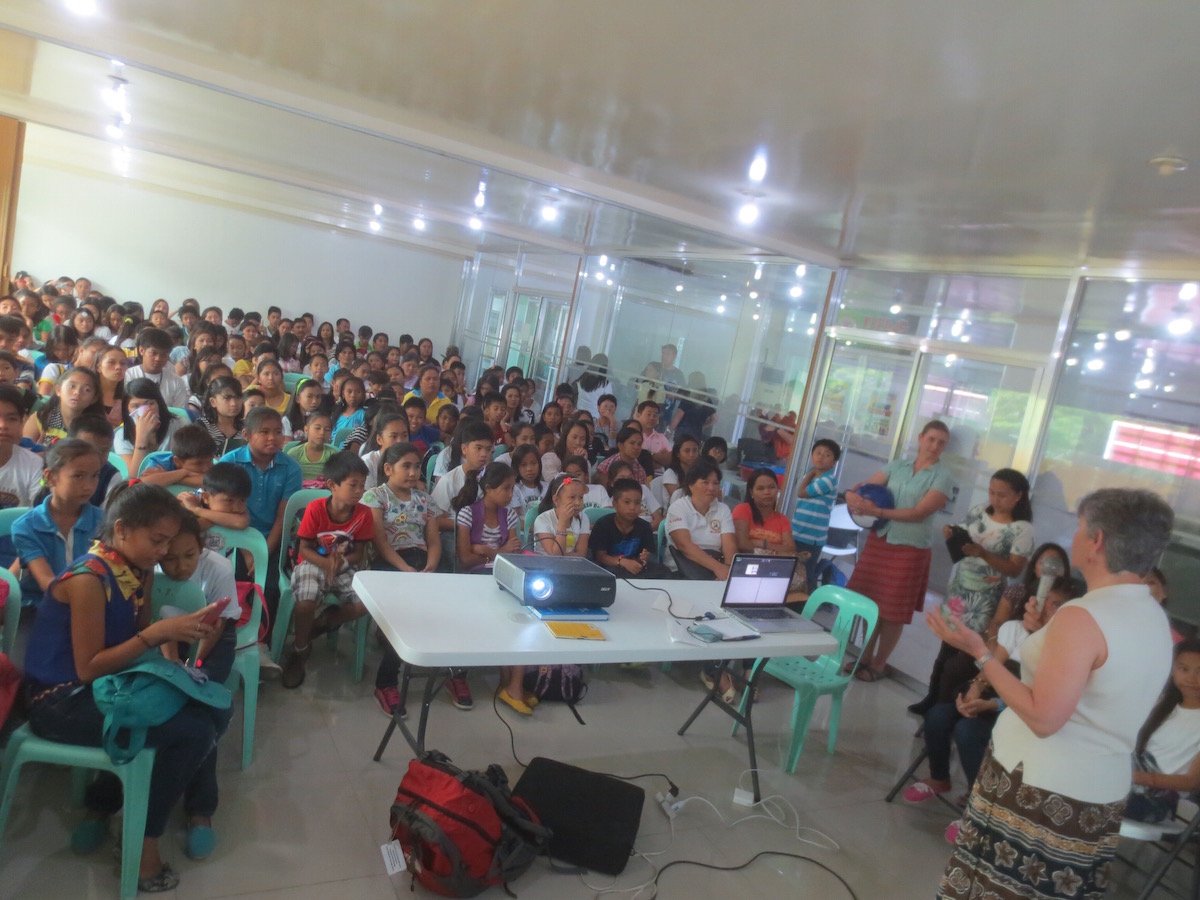 I also got to blog about our adventures on the Academy youth community Tumblr, including arranging underwater shoots and interviewing scientists.

Upon returning back to homebase, we organized a cool meet-up between our Academy youth and our scientists back from the Philippines, plus a researcher based in Manila. We had specimens collected in the field, cool SCUBA gear, filipino treats, and more. 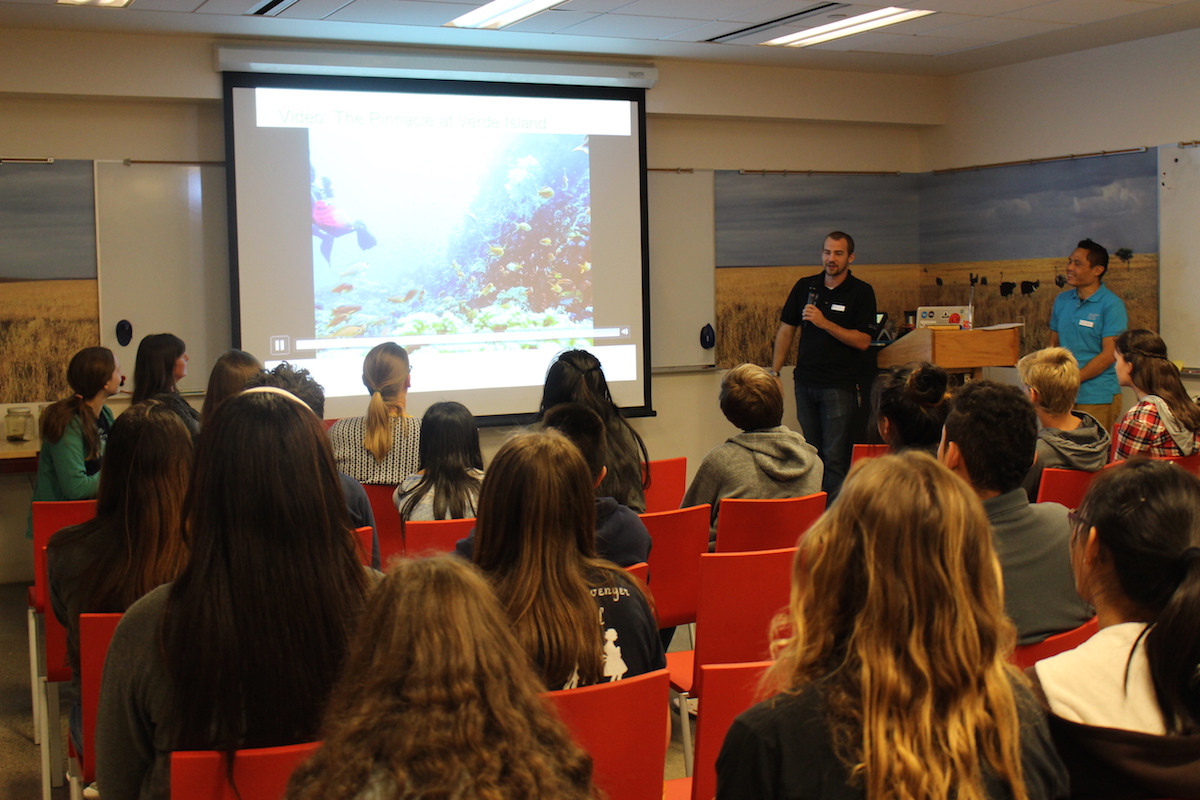 Exploring Teen “Playshops” at the Academy

This year, we piloted a series of “playshops” for teens at the museum, short explorations of technology and science led by various educators and tech innovators from around the Bay Area. We got to connect with the wonderful diversity of awesome companies, nonprofits, and tech innovators in the Bay Area and bring in a wide range of young people to play with neat tech and science tools. Our 2015 “Playshops” included the following cool topics:

While we aren’t currently pursuing future Digital Playshops, we learned a lot about how to create short, impactful experiences for young people. 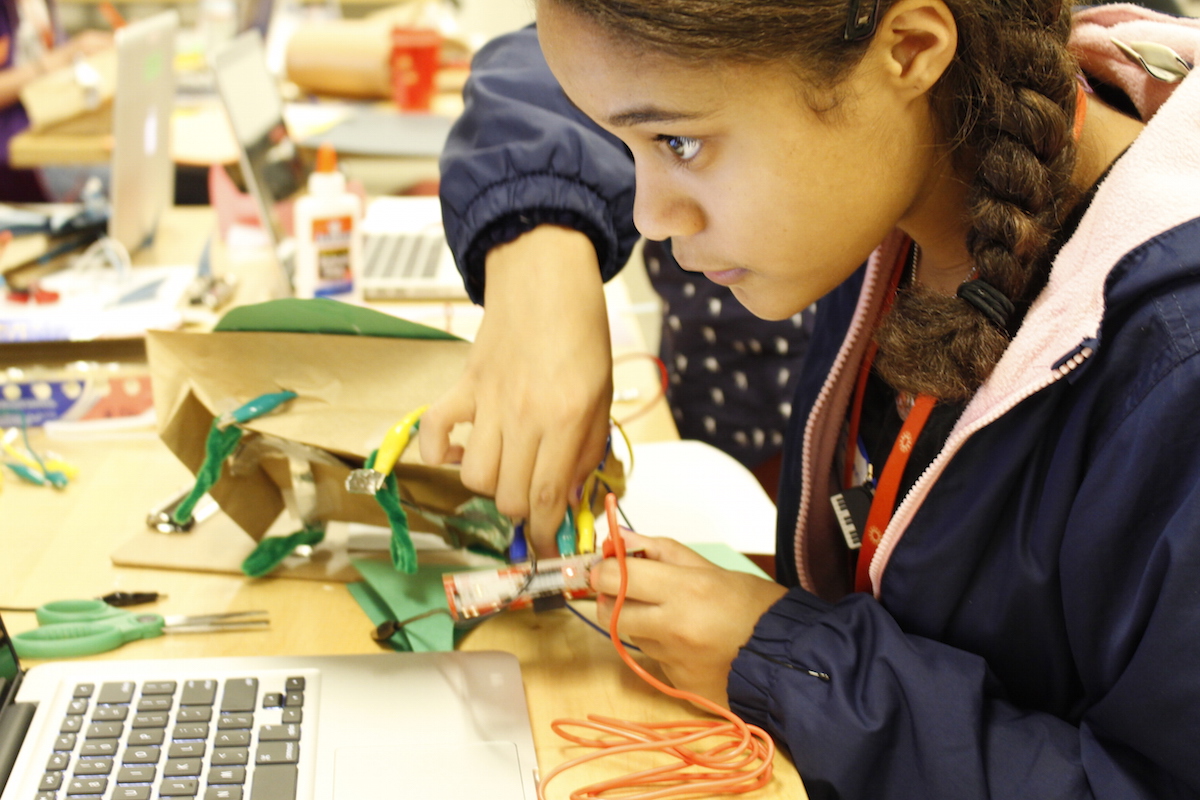 One of our goals in Digital Learning was to increase the visibility of the work we are doing, and our perspectives on relevant topics. In 2015, I collaborated with my colleagues at sister institutions — Barry Joseph at the American Museum of Natural History and Eve Gaus at the Field Museum of Chicago — to launch “Object Oriented”, a new podcast on digital learning at collections-based science museums.

So far, we have put out three episodes of “Object Oriented”, covering topics that we thought were relevant to the field of digital learning and informal science education:

We’ve loved the response so far to our episodes and are planning several more in 2016.

Other exciting developments in 2015

Thanks for being a part of Digital Learning at the California Academy of Sciences. I’m super stoked about what we have cooking in 2016. Stay tuned…