I have been helping lead one of our teen project groups for the internship program at the Academy. Project groups are opportunities for our interns to work together on some longer term project or topic, supported by a staff person, over the course of a semester.

My project group is called “Big History”, a group of five teens who have been exploring the history of our universe, including seven major “threshold” moments in time, from the Big Bang, to the formation of stars and our solar system, to the emergence of life, and the dominance of homo sapiens on the planet. It’s thinking of time in the range of billions of years rather than our infinitesimal lifespans. MIND BLOWN.

During one recent session, I had them thinking about what would be a major issue or challenge facing humanity in the next 100 to 500 years. Their task was to imagine a problem and come up with a possible solution, one that either (1) prevents the problem from happening in the first place, or (2) mitigates the negative effects of the problem.

One groups of teens chose the issue of “The Singularity.” I.e. what happens when computers become smarter than humans and we are no longer the dominant species on the earth. They had some creative solutions, including including a moral code in machines, so they won’t enslave or kill us, or building in an “off” switch so they can’t take over.

Here’s an illustration of how we would avoid a robot takeover– just wait for their batteries to run out. 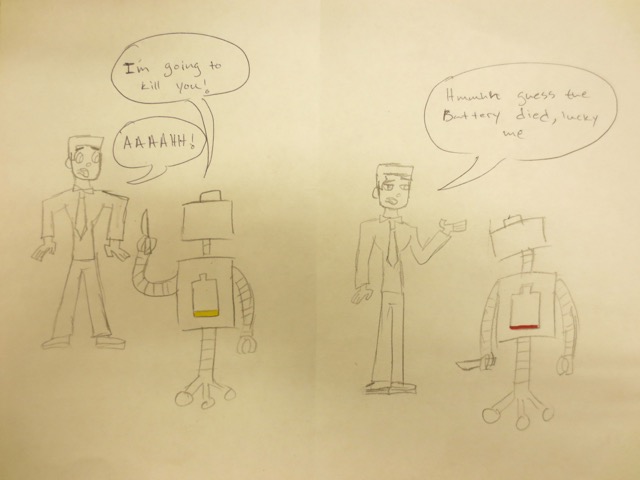 The other group had a harder time coming up with their future solutions. They chose the issue of natural resource depletion on the Earth. Their solution was to find another planet for humanity to thrive on, since we weren’t going to be able to “fix” the Earth.

“So where are we going to go?” I asked them.

“We’ll get in a ship and go to another planet,” Leah replied.

“Hmmm, I guess we’ll have to leave the solar system and find a planet somewhere else in the galaxy,” Jia-hua mused.

“So you are going to find an exo-planet that has earth-like conditions that will support life. The problem there is that you won’t know until you get there if it can support human life. We have a pretty narrow range of conditions that we can live within. The planet might be covered in water, or freezing cold, or not have anything that we can eat.”

“Hmmm, so I guess humanity is doomed,” Leah concluded.

“Guys, you had one job. YOU HAVE TO SAVE HUMANITY.”

“But we can’t!” they complained.

“Well you have to. You have 30 minutes to figure it out,” I concluded.

They went back to work and came up with a plan to send several ships to different planets, hoping that at least one of them would have the “Goldilocks” conditions that would support human life. Here’s how they illustrated their scheme. 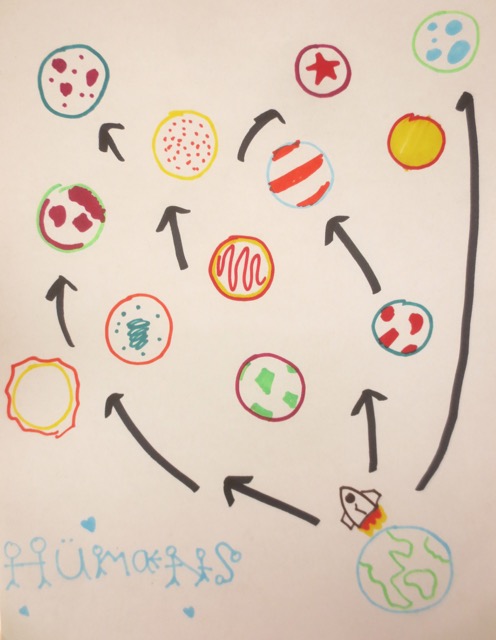 I’m pretty excited to visit the red stripe-y planet. But the one with the blue splotches at the top probably is the best candidate. What do you think?

I’ll say it again. I have the best job.