I have on my desk a pile of plastic 3D-printed marine animal parts that I’ve kept for years. I’ve use it as a reminder of that:

I realize that I’ve been kind of embarrassed to tell the story of where these 3D-printed parts came from. So as I approach a milestone in my career, it seems like a good time to face that awkwardness.

In the Spring of 2013, I organized with my co-educator Christine the “Fastest Fish 3D Modeling Spring Break Program” at my museum. It was basically a science camp for a dozen middle school youth that we ran together.

The Cal Academy had recently opened a new exhibit called “Built for Speed,” focused on fastest animals in the sea. To highlight the themes of the exhibit, we decided to have our young campers learn about marine animal biology. It made a lot of sense as a topic area: our facility has a world-class aquarium, scientists who specialize in marine animals, and tens of thousands of marine specimens behind-the-scenes.

Being a Digital Learning camp, we wanted to bring in a technology that made sense for our topic and our audience. In 2013, 3D printing was a new and largely untested technology. Few institutions had them and there were only a handful of consumer-ready models.

So this was our brilliant idea: What if we had a group of middle schoolers using 3D printing technology to “discover” their own unique marine animals based on what they had learned about marine animal physiology and their ecosystems? During the camp, the kids would use design software to create a 3D model of their imagined animal, which would then be printed out for them before the end of the camp.

Fortunately, I had a contact at a local company that was trying to market their 3D printer. They were excited to have kids learn about and use their printer. They offered to lend us one for the week, and help us to print out 3D objects for the program.

On the software side, we had found some easy-to-use freeware that our campers could use to design 3D objects.

In retrospect, I should have been a little worried about how integrating 3D printing into a Spring Break camp would go. It was the first time we had ever used 3D printing in a youth setting. We had no experience working with this company or their tools. And we only had six days to get it done with a bunch of middle schoolers.

But we decided to go for it and hope it worked out.

We weren’t totally crazy. We decided that given how long it takes to print 3D models, that we would create a bunch of them ahead of time to let our campers use during the camp.

We provided a set of reference images for our 3D printer partner and had them create a collection of marine animal parts for our camp. Here’s how they turned out. 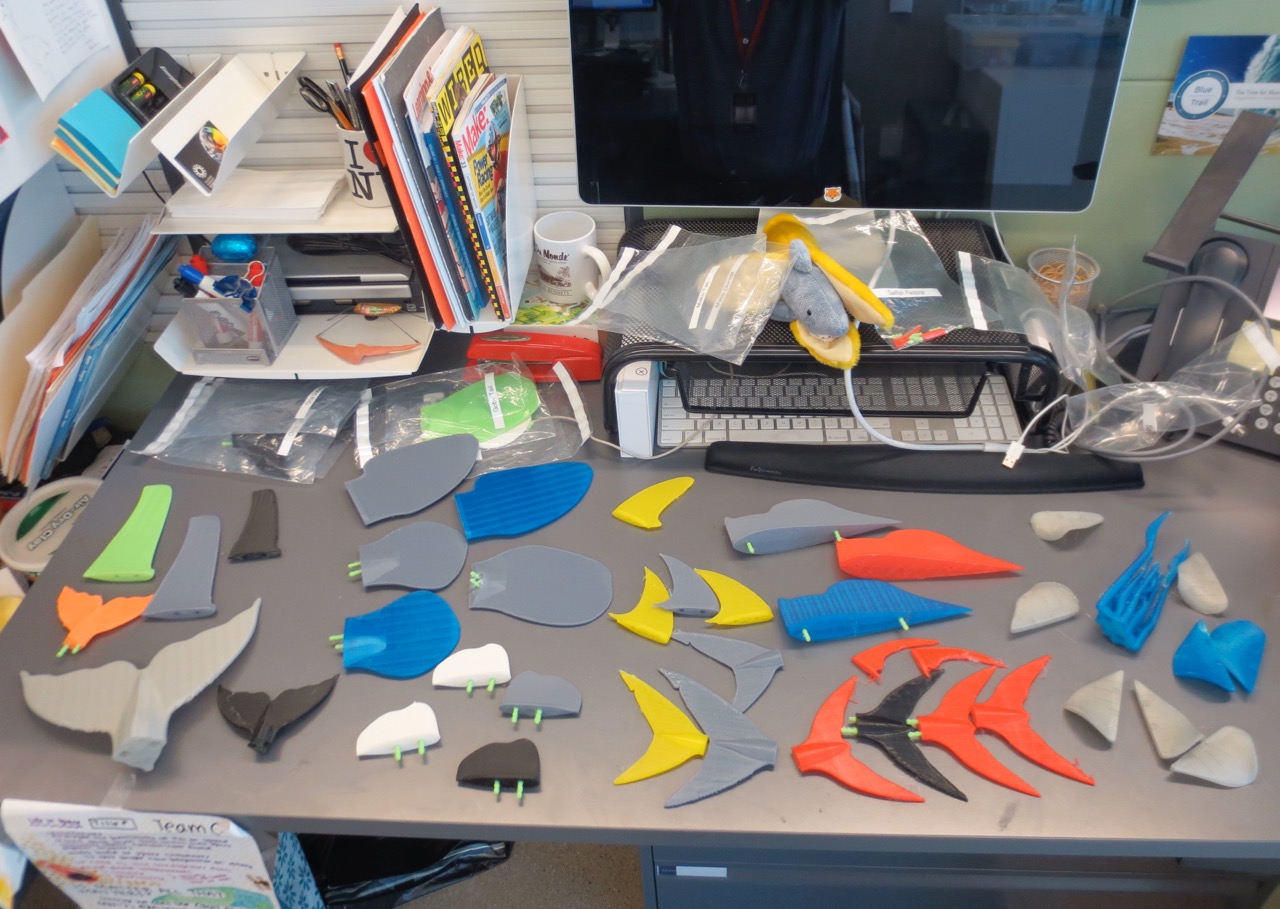 As you can see, we had a lot of fins, tails, and a set of tentacles. They even had some neat connectors to help attach them to other parts. So far, so good.

Now we had to design the actual camp experience. Looking back, I’m pretty proud of how awesome this camp schedule was.

There are a few things I notice, looking back on the camp. We packed in a lot of activities into six days, probably too many. Middle schoolers have definite cognitive load constraints, and need lots of time for running around, being goofy, or just being on their own. If I were to do this camp today, I would have more breaks and fun time.

On the positive side, we had a lot of neat elements that made this camp unique:

Days 1-4 went quite well, from my recollection. There were some kids who were a little wilder than others. Other kids who were super shy. Two boys who couldn’t be in the same group together because they made each other crazy. You know, the usual.

Kids got pretty excited about creating their own marine animals, based on their understanding of biology and what they had experienced during the camp.

Here’s an illustration of the “Blue Sail Shark” that one team created.

And here’s the clay model they created, with attached 3D printed parts. 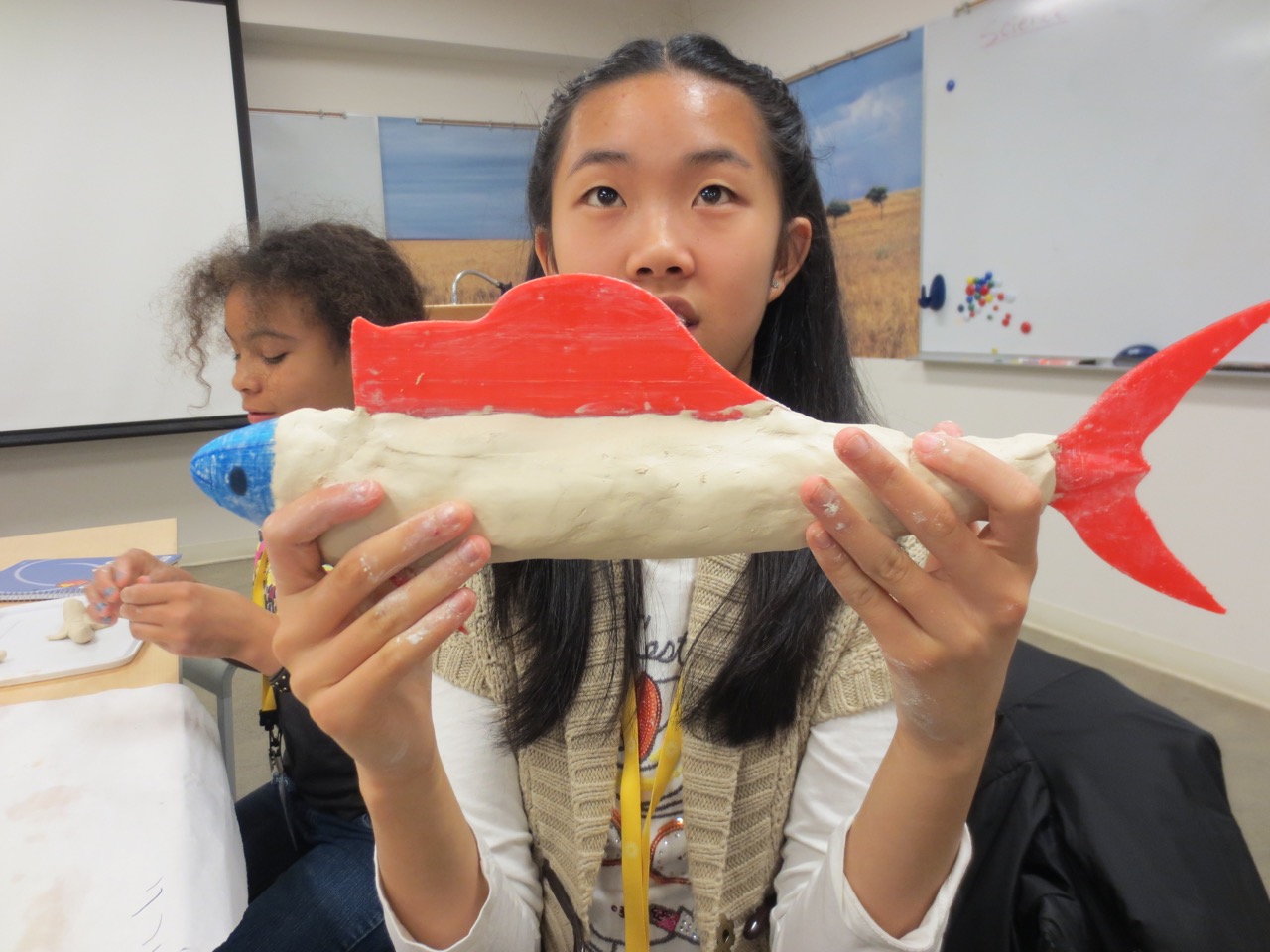 And then, things stopped working.

Our contact at the 3D printing company told us on Day 3 that he was worried that we had not given their designer enough time to get the 3D models, adjust them to work with their printer, and print them out in time for the youth on Day 6.

So we moved up the schedule to have the youth actually created their 3D models on Day 4, which gave the company a day and a half to print out the models. The kids created what seemed to me to be fairly simple models of animal parts — a head, a couple of fins, a tail.

This turned out to be an optimistic estimate, for reasons that are unknown to me. Maybe the designer got sick. Maybe the printer was sick. All I know is that they said they couldn’t make the 3D parts that our kids had designed in time for the end of the camp.

Instead they offered us… a handful of 3D printed keychain fobs with vaguely fish-like heads. 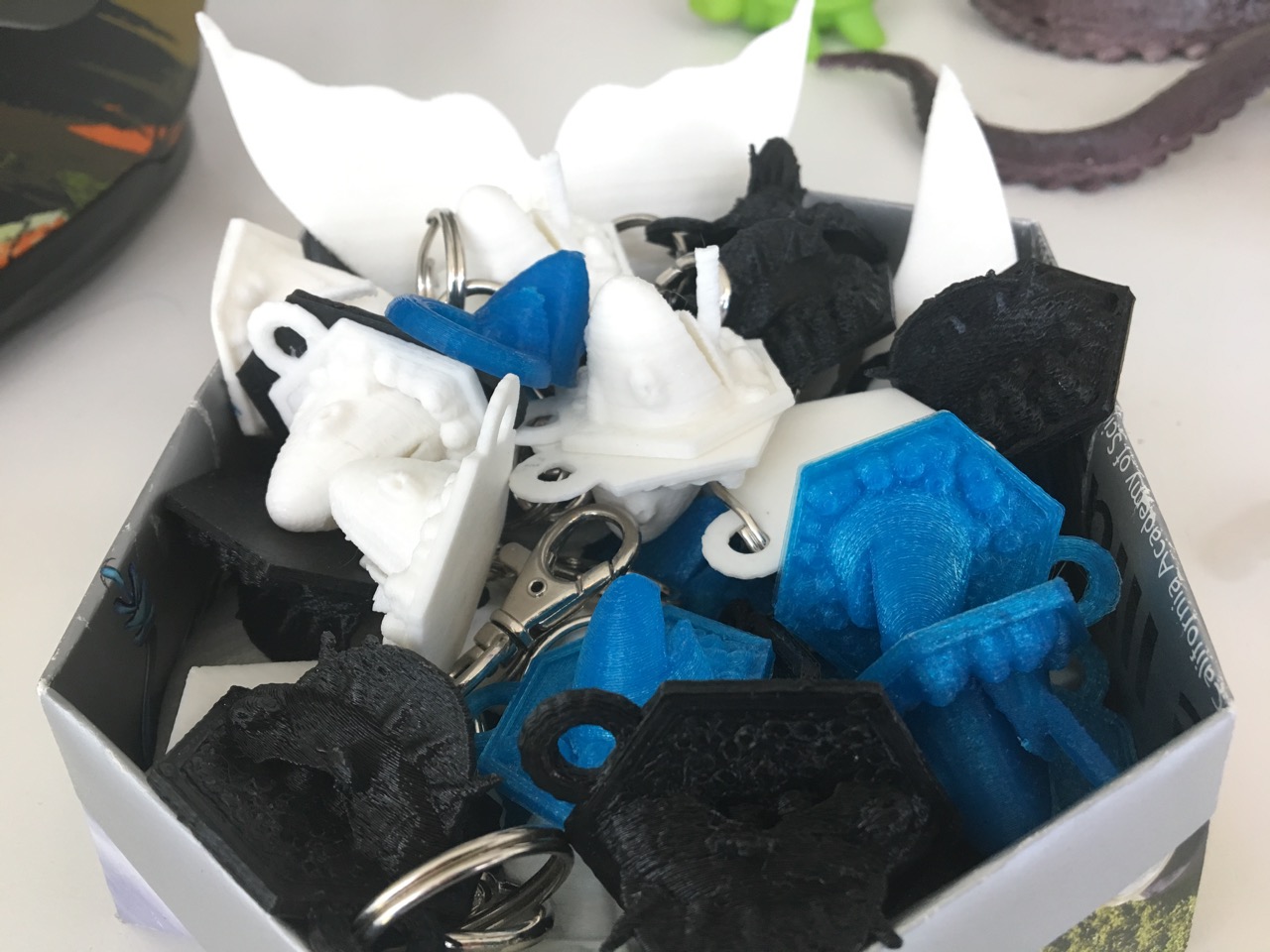 So, yeah, not the same thing.

The Show Goes On

So the final day of the camp had arrived. A presentation by the campers to their families and the visiting public was scheduled for that afternoon. And a critical part of their marine animals they had designed would not be ready for them. DISASTER!

We didn’t have a lot of options, so decided to just run with it. This is what we told our campers:

“Good morning, scientists! As you know, today your families are coming to the Academy to see your presentation of your amazing marine animals that you discovered during this expedition.

“The good news is that your teams have created some fantastic marine animals for you to present. You’ve all learned so much and done so much in the little time we’ve had together. You should all be proud of your work.

“The bad news is that the 3D printed parts that you all designed are not ready yet. So we should plan on presenting without them. But we’re confident that you are going to do a great job anyway.”

We were expecting them to freak out, run screaming from the room, burst into tears. Instead they just sort of collectively shrugged and started working on their presentations.

I realized that I was freaking out about the missing 3D parts, not the kids. For them, it was something they had never seen and didn’t have any strong expectations about receiving.  In their minds, their creations were already there in front of them. The custom part was just icing on the fish.

Their 3D parts did arrive at the 11th hour, but it hardly made a difference. They all did a bang up job on their presentations. They got a chance to share their learning and their creations with their peers and their families. Their parents beamed and shot hundreds of photos. That was what mattered. 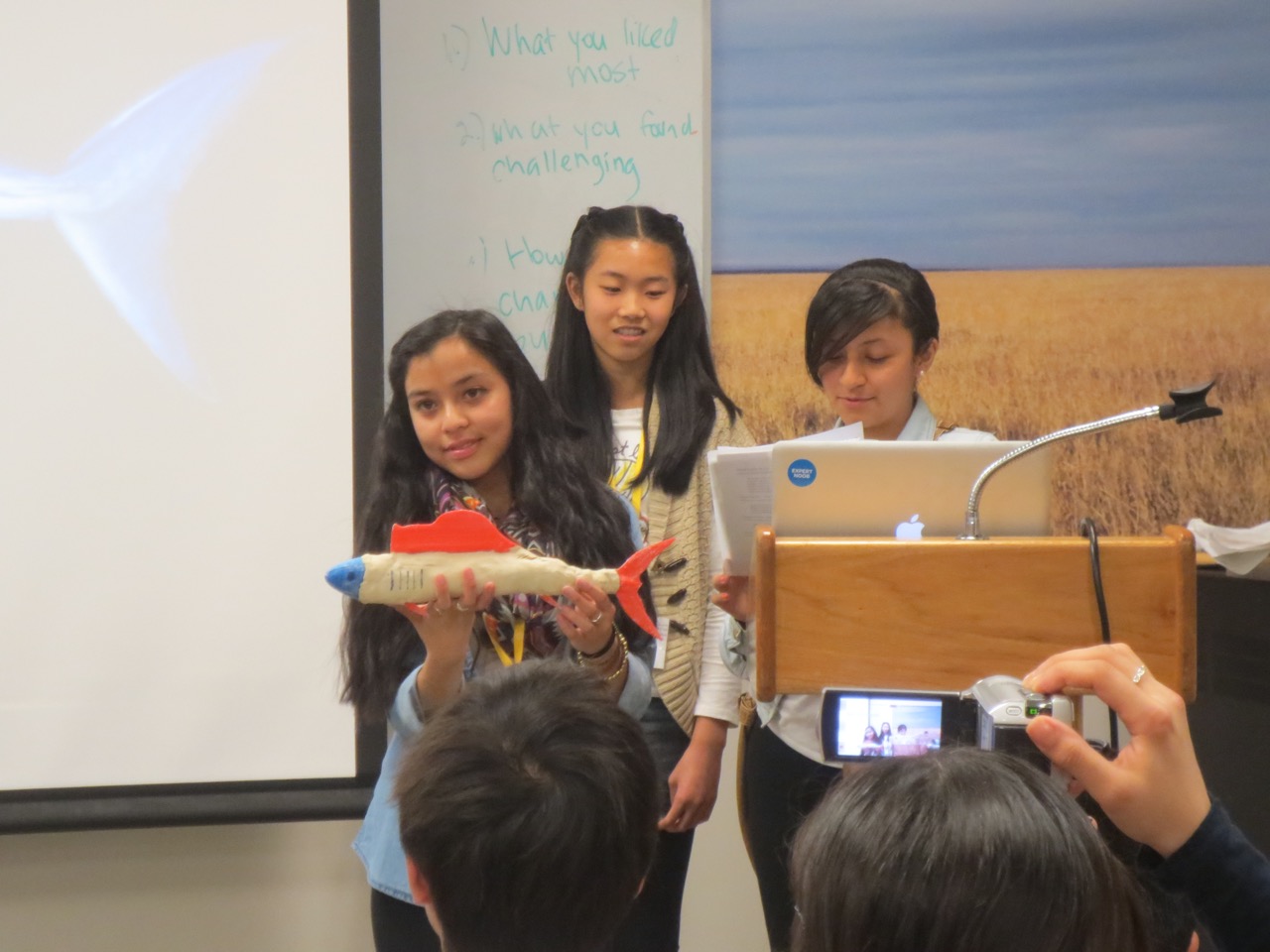 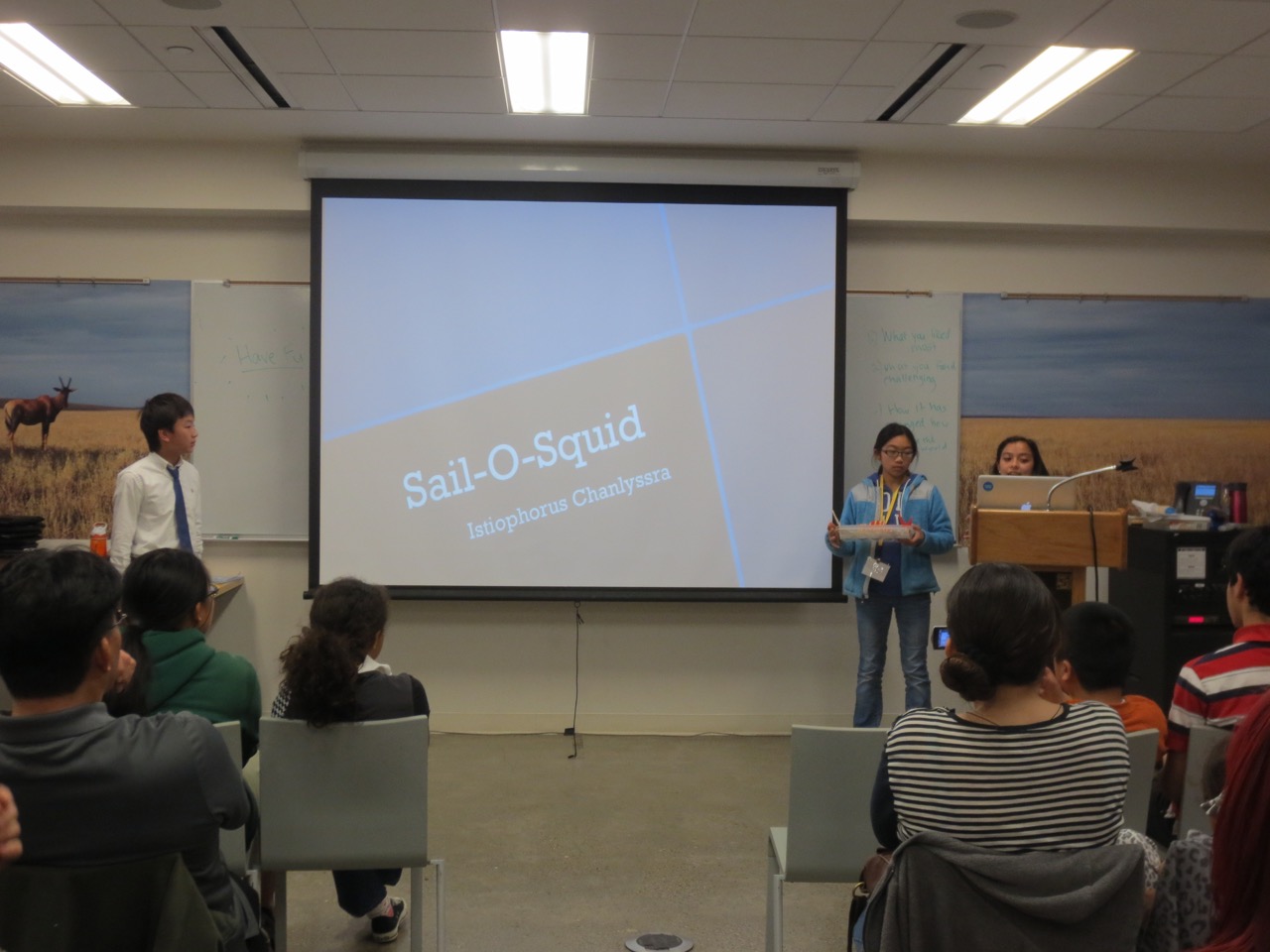 There is definitely a lot I would do different, if I were to run this camp today – test out the 3D printer first, have a designer on my team, have a fall-back plan if the print didn’t work, etc. But we did the best we could with the information we had. And it turned out great for the kids and their families.

As I look back on six years of creating programs like this, I’m proud of all of the weird and wonderful creations, all of the moments of discovery and awe, all of the “stand and deliver” opportunities that we made possible for thousands of kids. A lot of those kids I know are still excited about science, still creating great stuff in the world. I got to play a small part of the support system that helped them achieve their potential. I couldn’t ask for a better legacy.