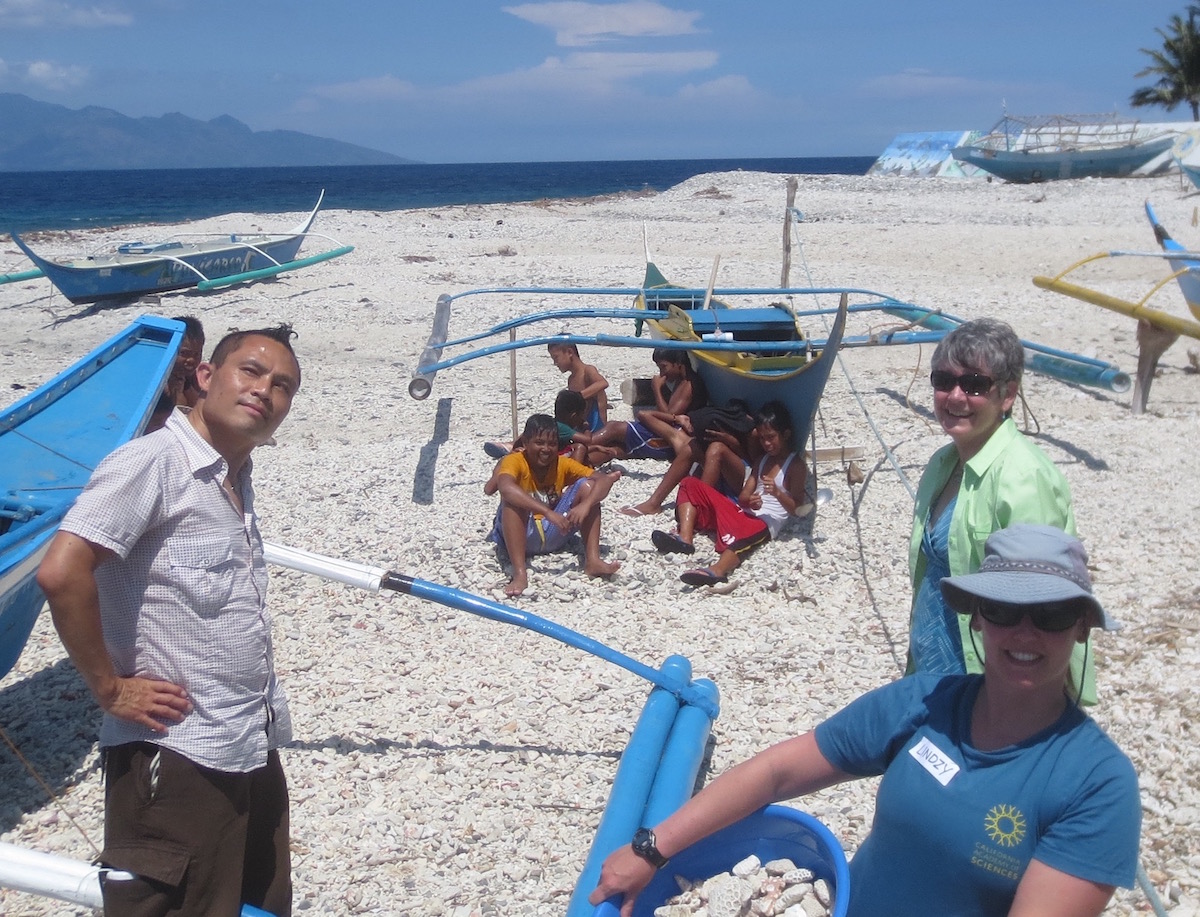 A couple of years ago, I had the pleasure of co-leading a series of community outreach events in the Philippines, along with my colleague Lindzy. This was part of a much larger "Verde Island Passage" scientific expedition, focused on an area of the Philippines called by some "the center of the center of marine biodiversity" in the world.

I have been reflecting on what a remarkable trip that was, and how much I learned from the wonderful Filipinos we engaged with.

Our first community outreach was a one-day teacher workshop held at a high school in Puerta Galera. Lindzy and I were both nervous and excited. We didn't really know what to expect, other than there would a bunch of science teachers from all over the area.

We got a quick introduction to how Filipinos like to conduct their workshops — with song and dance! Here's a group of teachers doing a fun dance for us to start off the day.

This was followed by several songs that everyone in the room sang together. Wow.

Here's what the classroom looked like from the back of the room. I really appreciated the natural light, bright colors and breeze coming through the doorways. 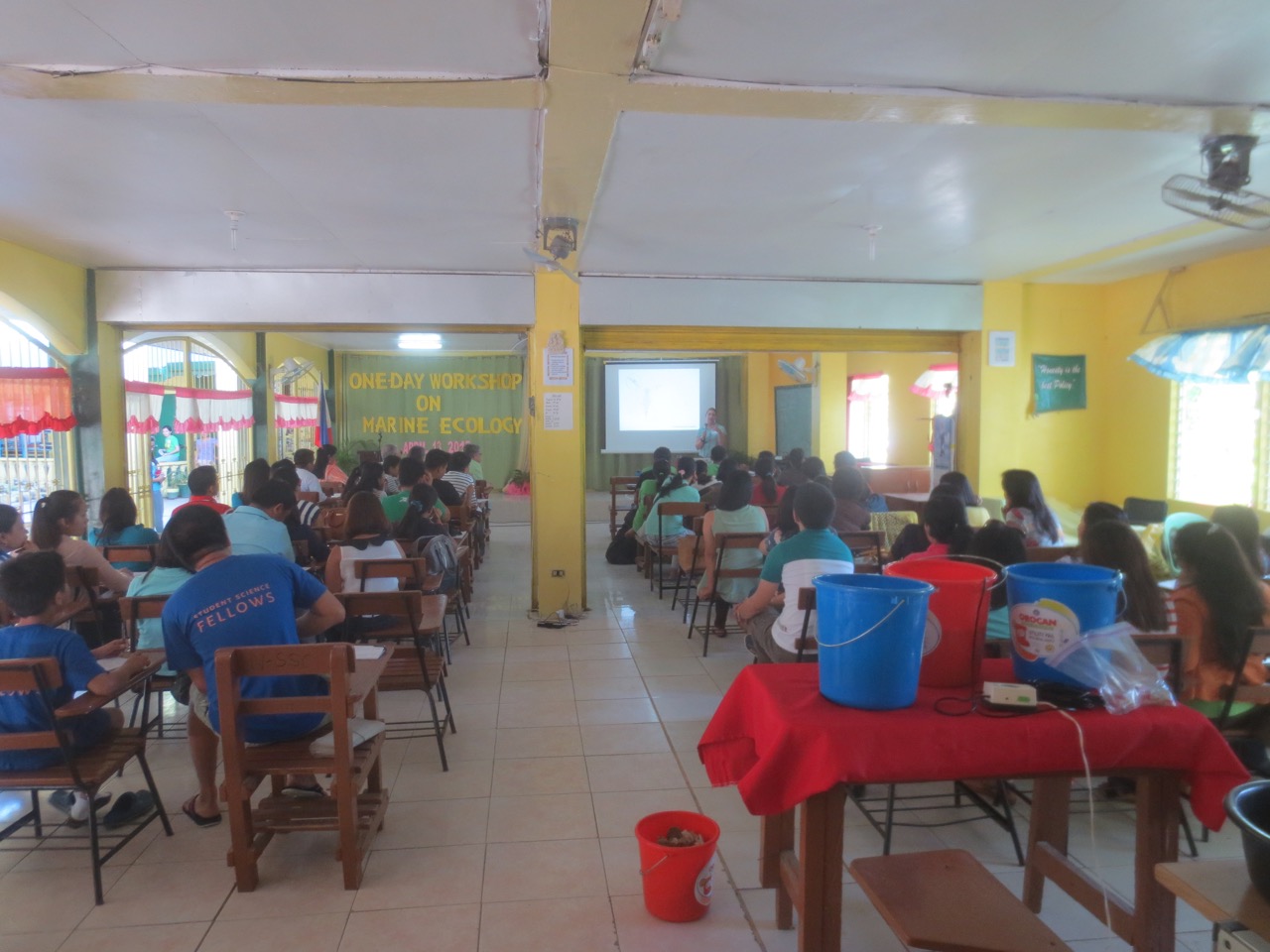 Meg Burke, one of the principal organizers of the Verde Island Passage Expedition, gave a warm welcome to all the participants and explained why the California Academy of Sciences was studying coral reefs in their region. Meg is so fantastic at this — clear, amiable, with impeccable manners. We learned so much from observing her. 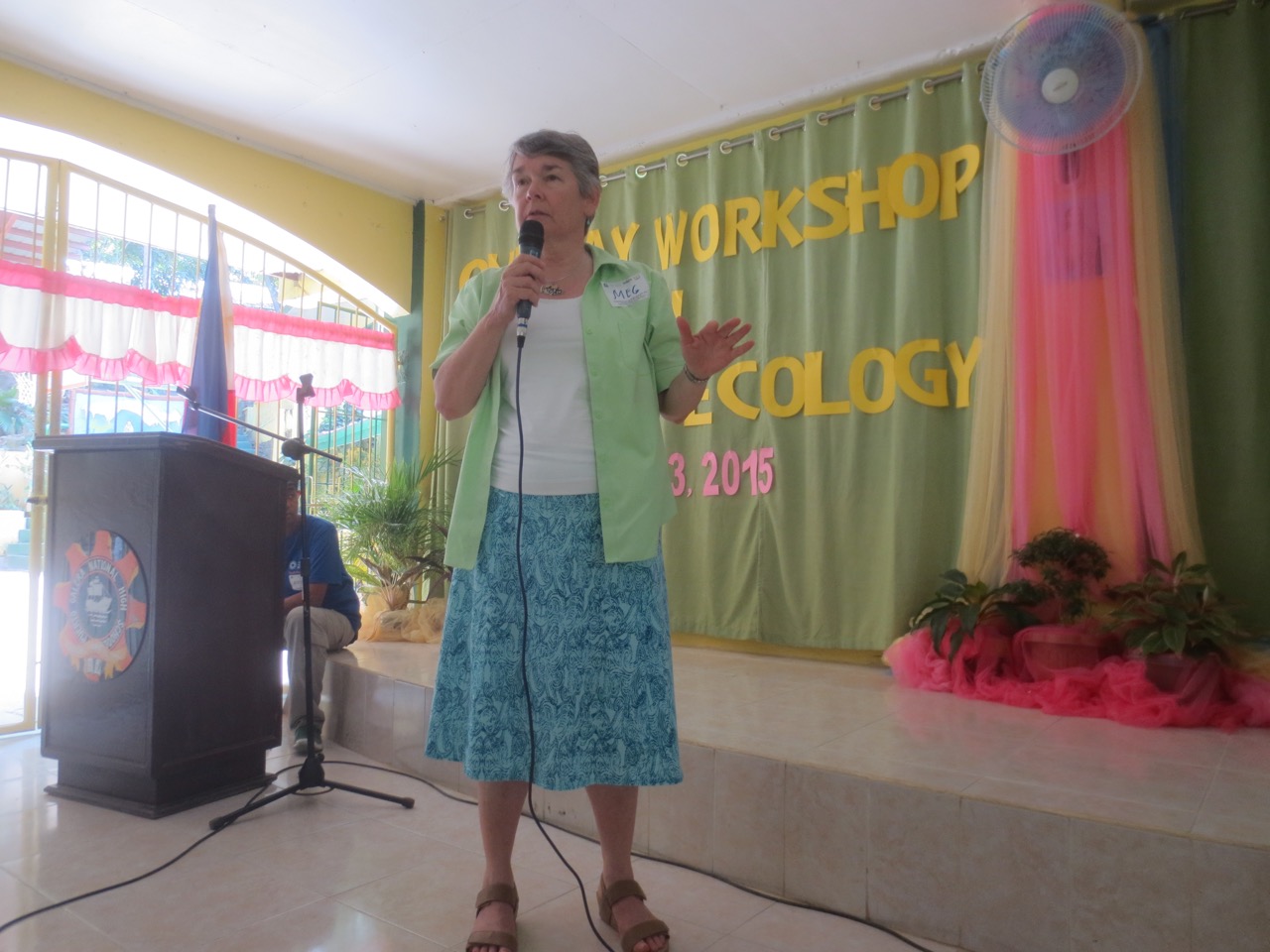 Joseph Comendador was one of the local Filipino researchers that accompanied our scientists on the expedition. Joseph talked about his important work on sea sponges and why they are critical species for scientists to study and understand. Having local experts on our community outreaches really helped make our work more relevant to our audiences. And of course speaking in their native Tagalog was a lot easier for them to follow and understand than our American English. 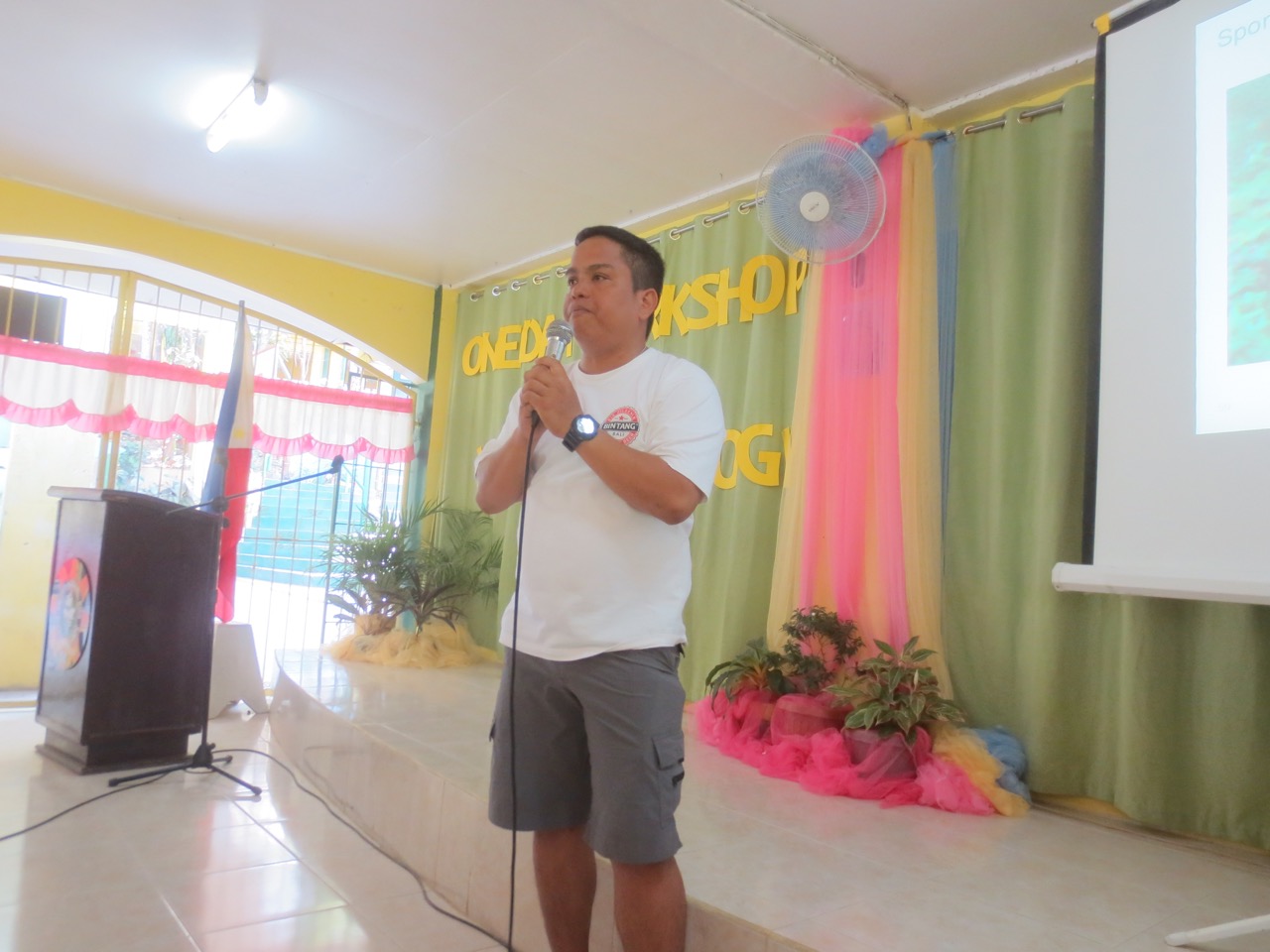 We spent as little time lecturing them as possible, with several opportunities for hands-on activities and group discussions throughout the day. Here are some teachers doing an investigation of a several local marine species that we collected in buckets and had them examine and discuss. 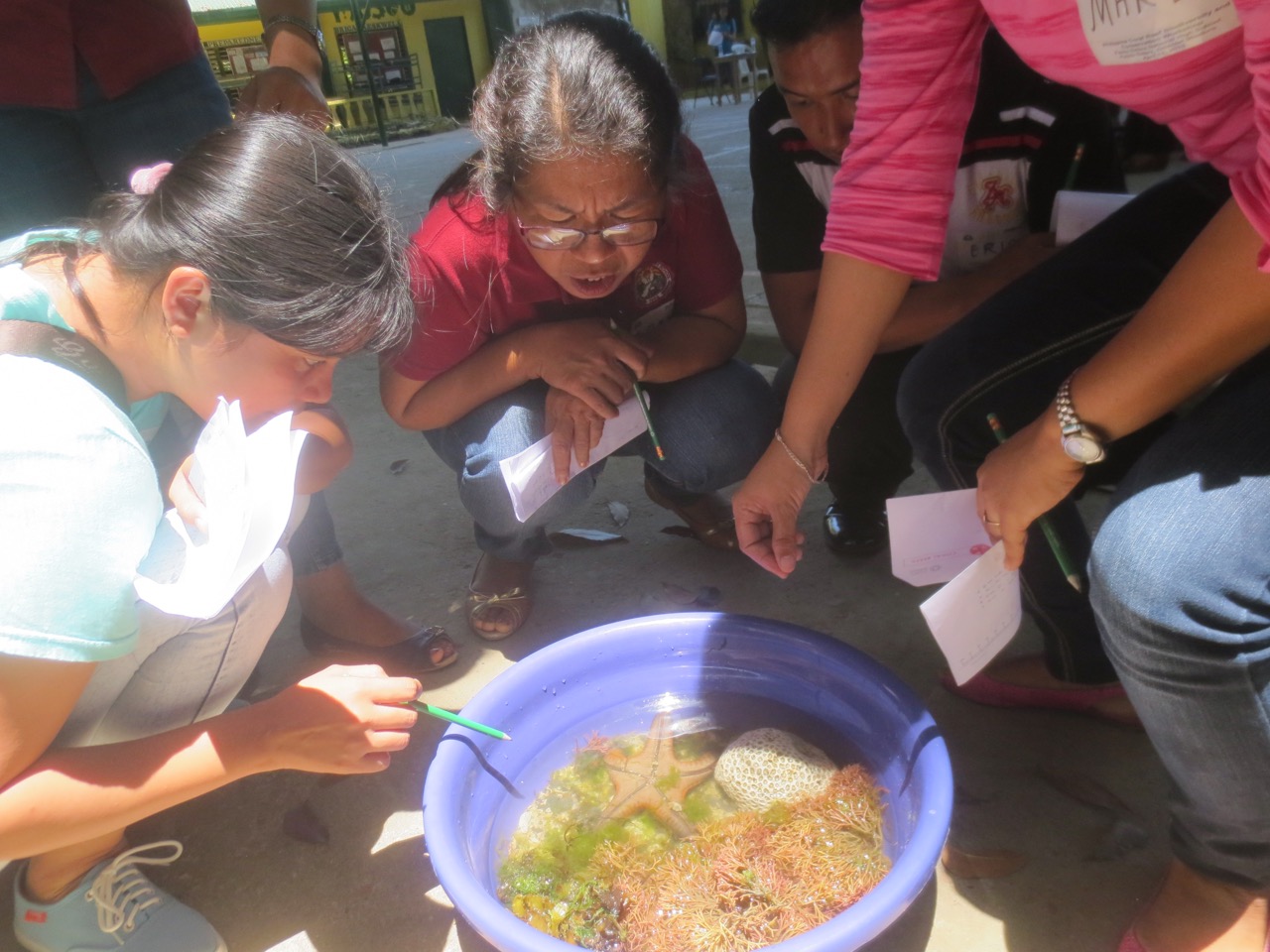 They really got into the discussions and loved touching and smelling the specimens. 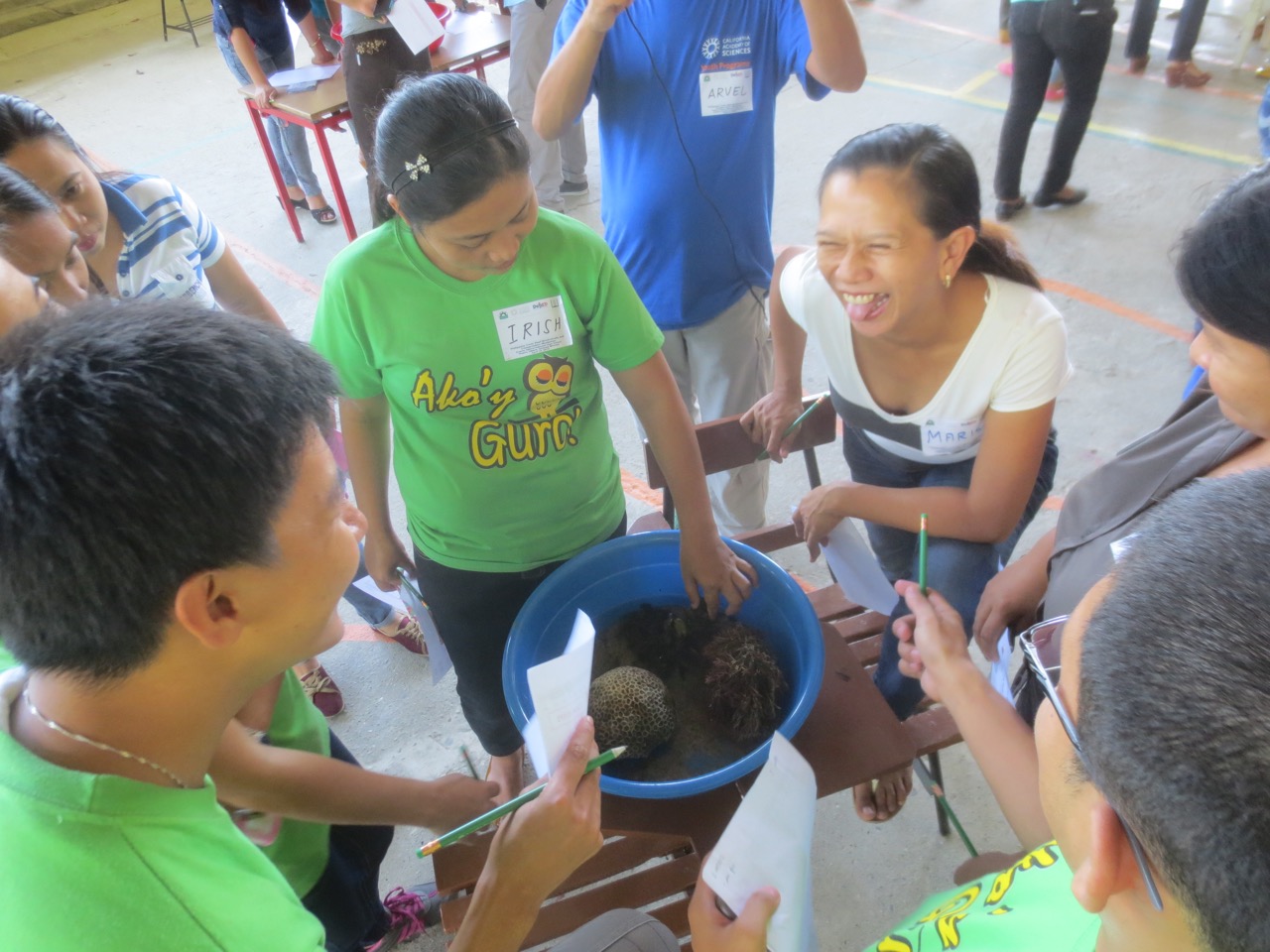 We closed the day with the teachers reporting out what they learned and planned to bring back to their classrooms. It was really awesome seeing their minds light up as they learned about the amazing life in their local coral reefs. One teacher remarked, clearly moved by the experience, “Why is it that foreigners come to the Philippines and get so inspired that they create a Philippine aquarium exhibit, but we Filipinos have not done the same for ourselves?” 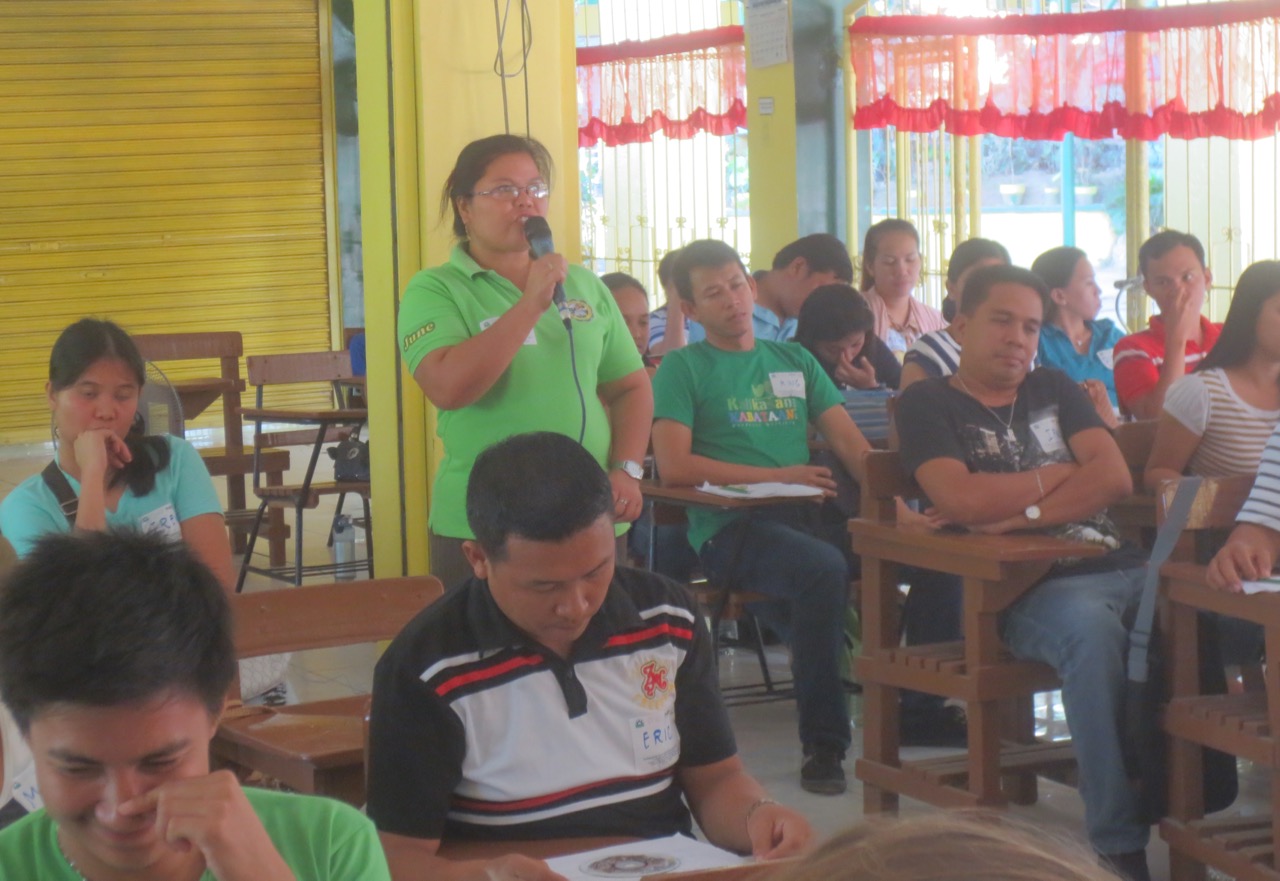 Here's the entire co-hort of fantastic teachers we worked with. 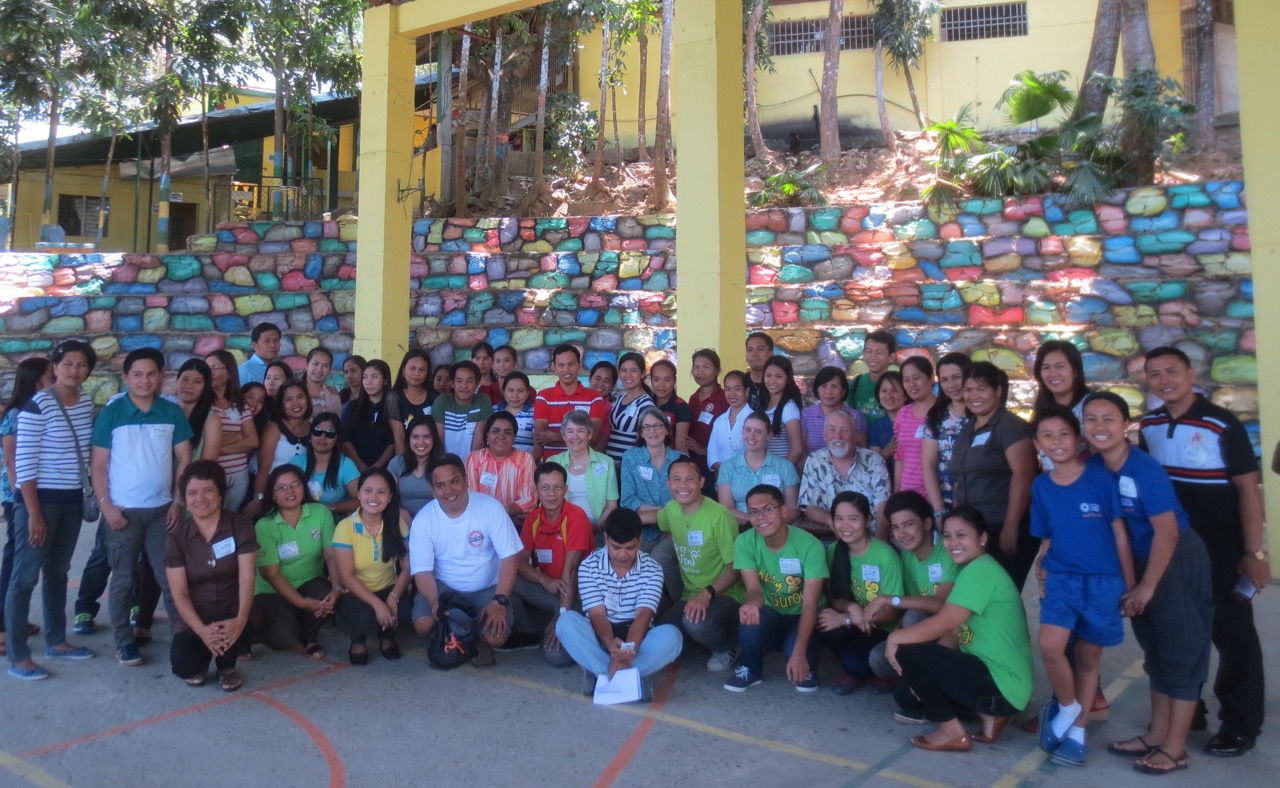 Lindzy and my lesson for the day was that we needed to greatly scale back our expectations of how much we were going to be able to verbally explain to our Filipino audiences. Our fast American English was too much for our Filipino teachers to follow. We knew that many of our other audiences would not be so comfortable with English or as prepared.

So we went back to the drawing board and scaled back a lot of our planned activities and pared down the language to the bare essential talking points. It was really hard, but fun challenge. 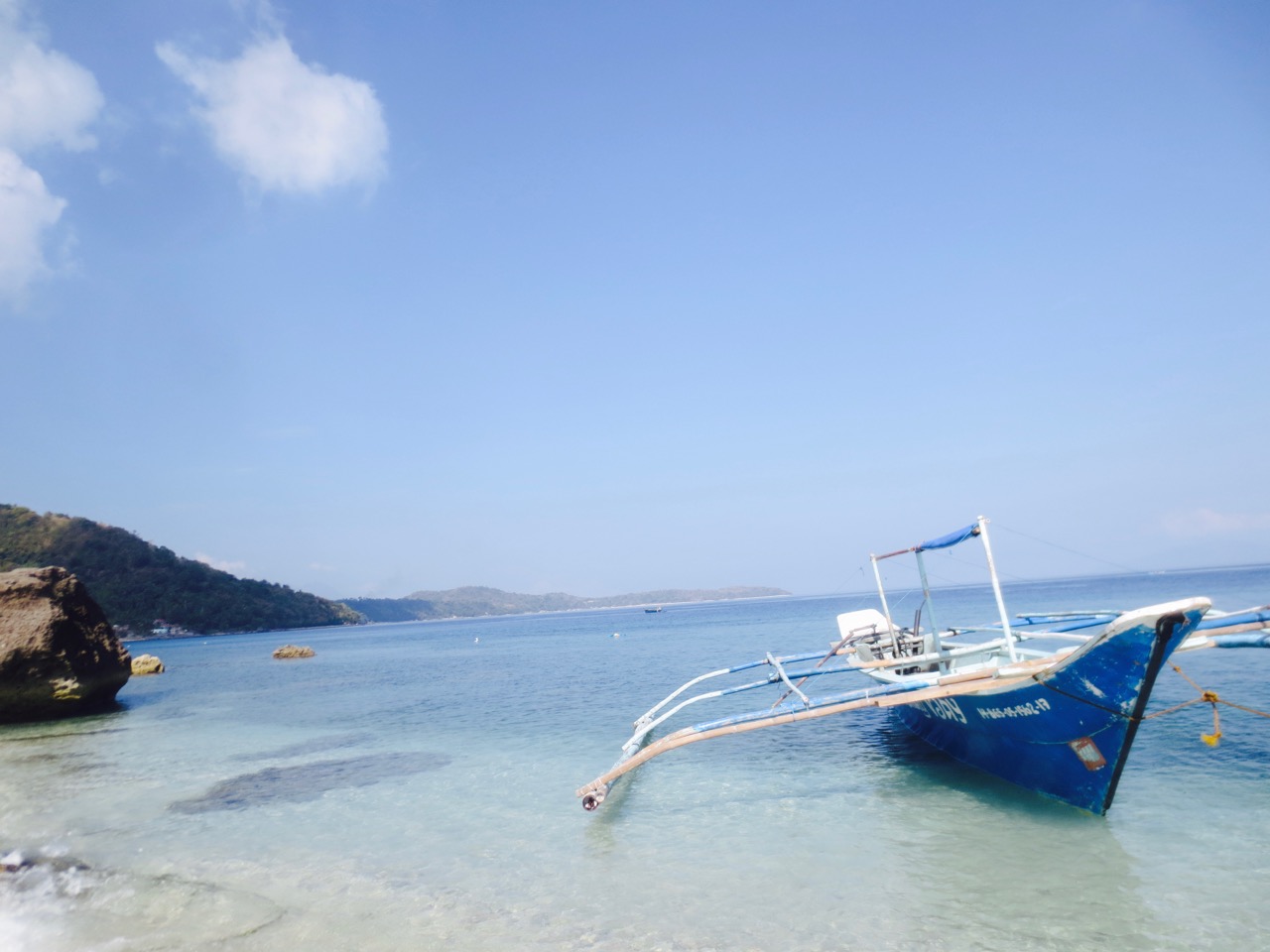 Our next community outreach was at the most beautiful setting – Verde Island, a small community in the heart of Verde Island Passage. One of the noteworthy features of the island is that it has taken the message of ocean pollution to heart — there are no plastics allowed on the island. There are also no cars and few roads. It's kind of a paradise.

Our community outreach setting was another local school, this time in the large courtyard that was surrounded by classrooms. I loved walking around and exploring the school — from the quaint classes, the beautiful "Science Garden", even the compost and recycling areas.

Our audience that day was a large gathering of mostly women and children, with a few elders from the town in attendance. Presumably most of the men were at work. 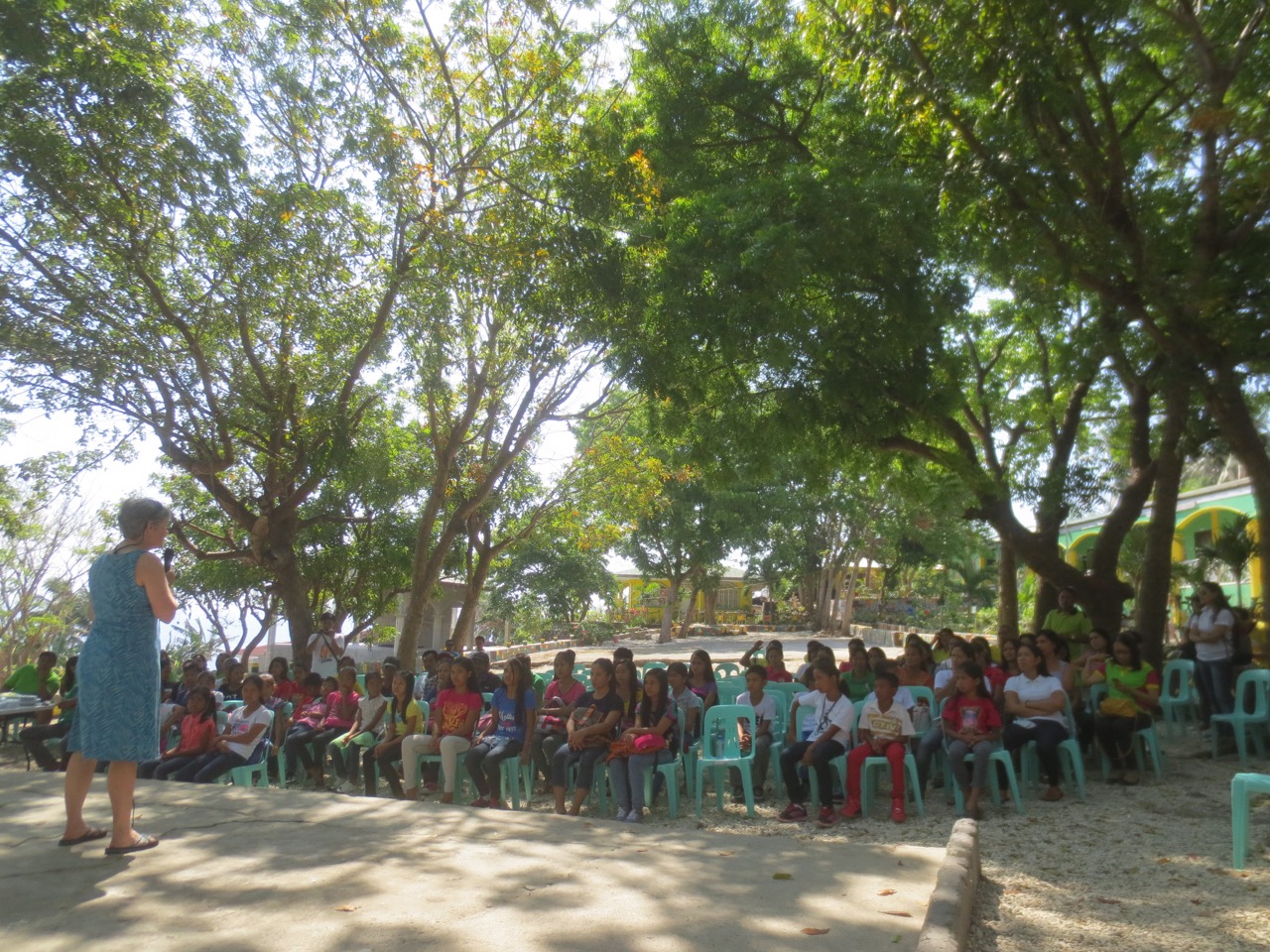 We were accompanied by a local NGO focused on sustainable development that led people into a fascinating brainstorming session about the future of Verde Island. Using large sheets of colorful people, groups of people got together to dream about the future of their island in 20 years. They shared their hopes for more jobs, a hospital, better roads, and tourism. I learned a lot about what their aspirations were, and the challenges they faced getting there. 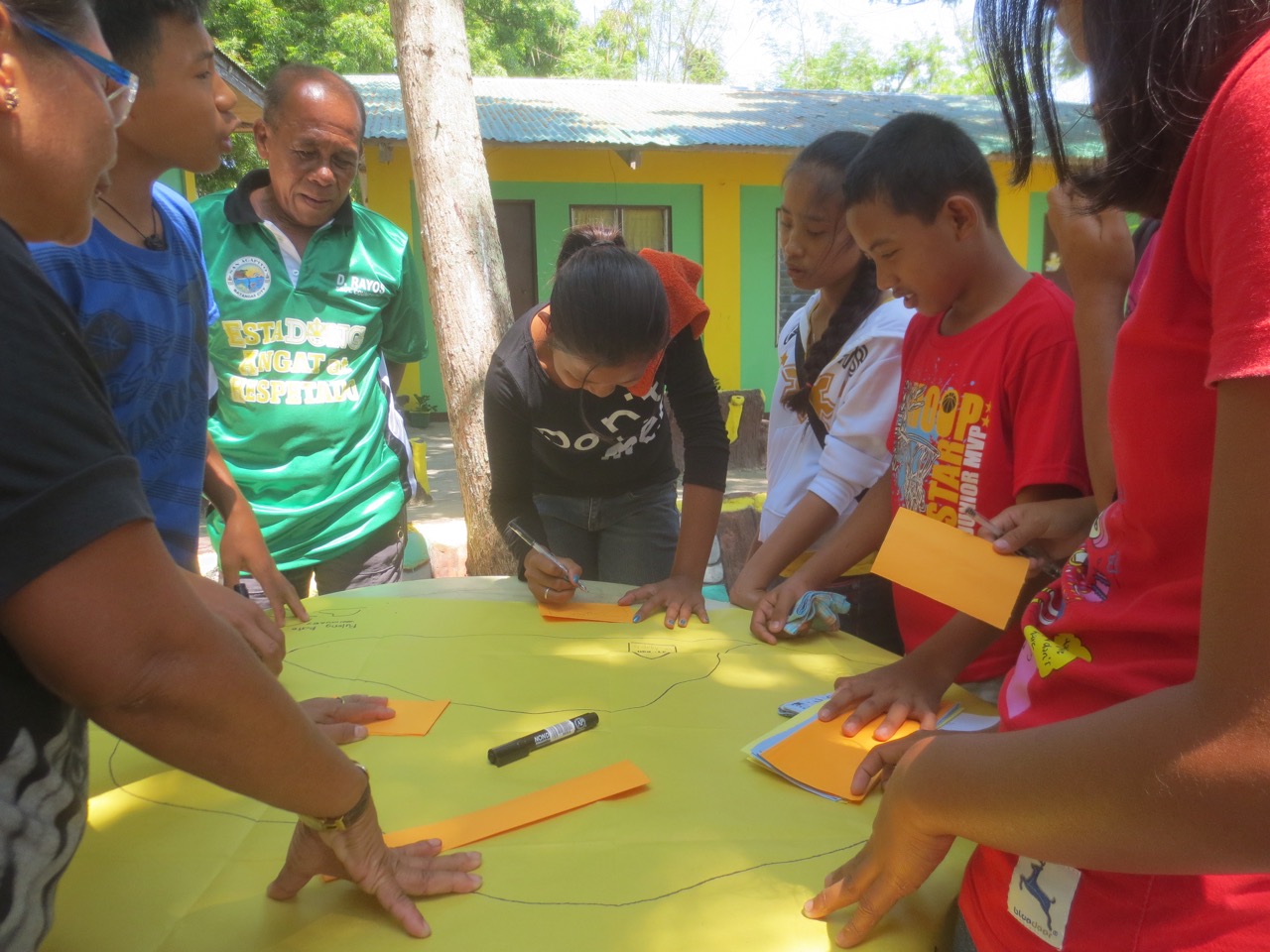 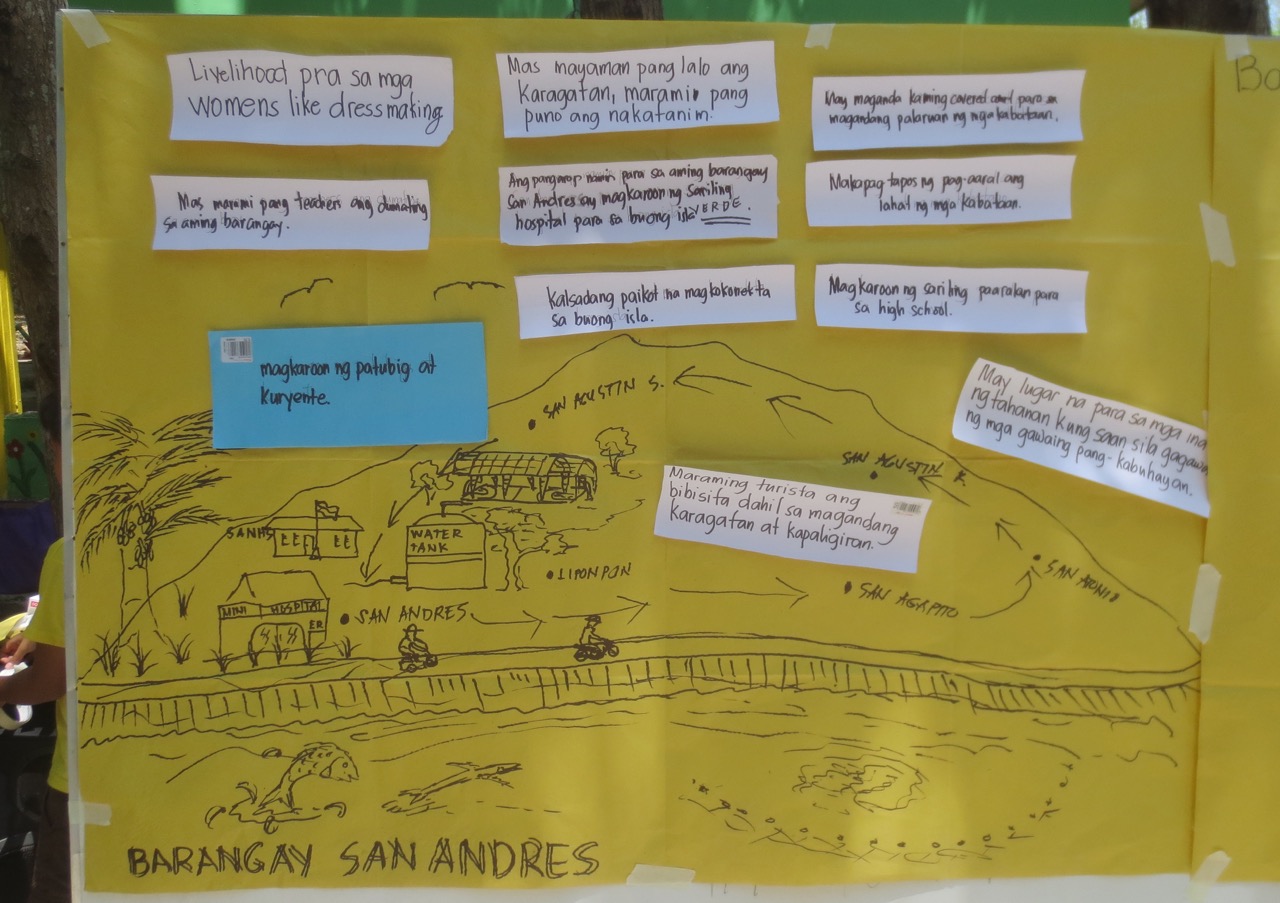 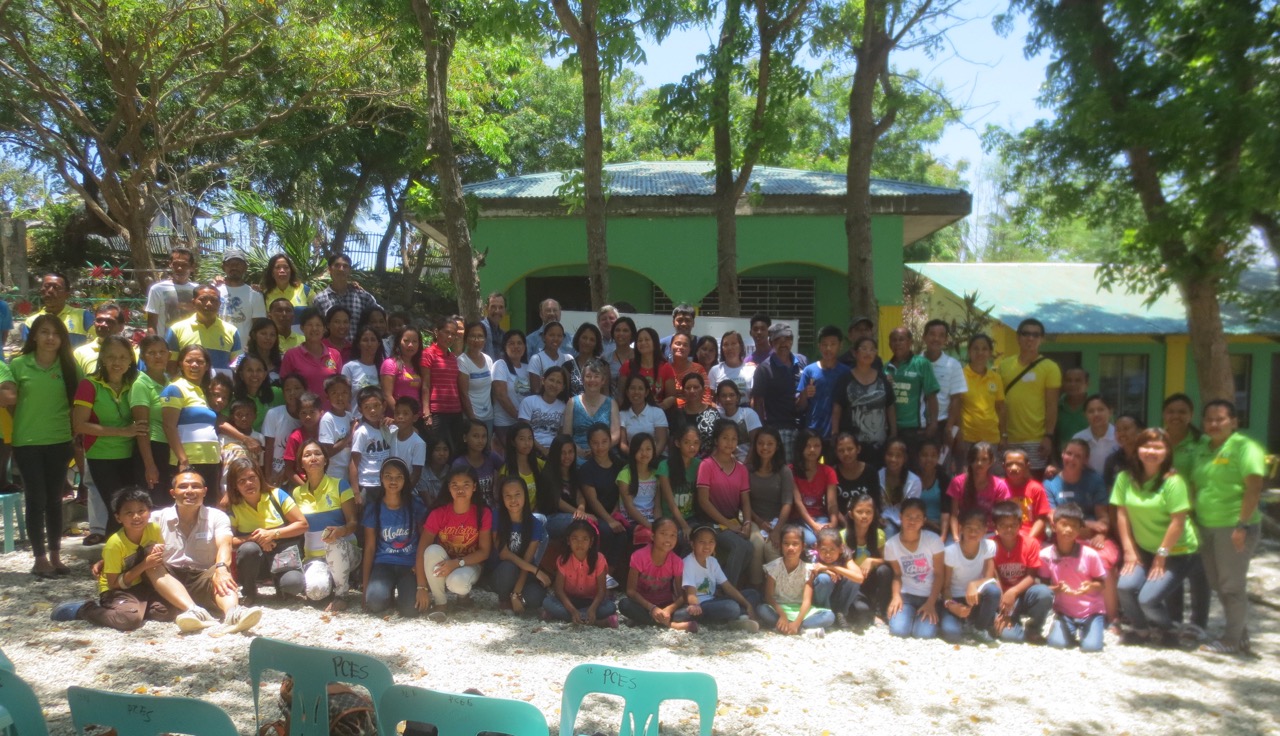 Our most challenging community outreaches was in a government office building in the city of Batangas. Similar to Verde Island, our audience was largely women and young children. However this time, were were not in a bucolic, breezy open courtyard. Our outreach was in a sterile, stuffy conference room, crammed with hundreds of plastic chairs for our crowd of participants. 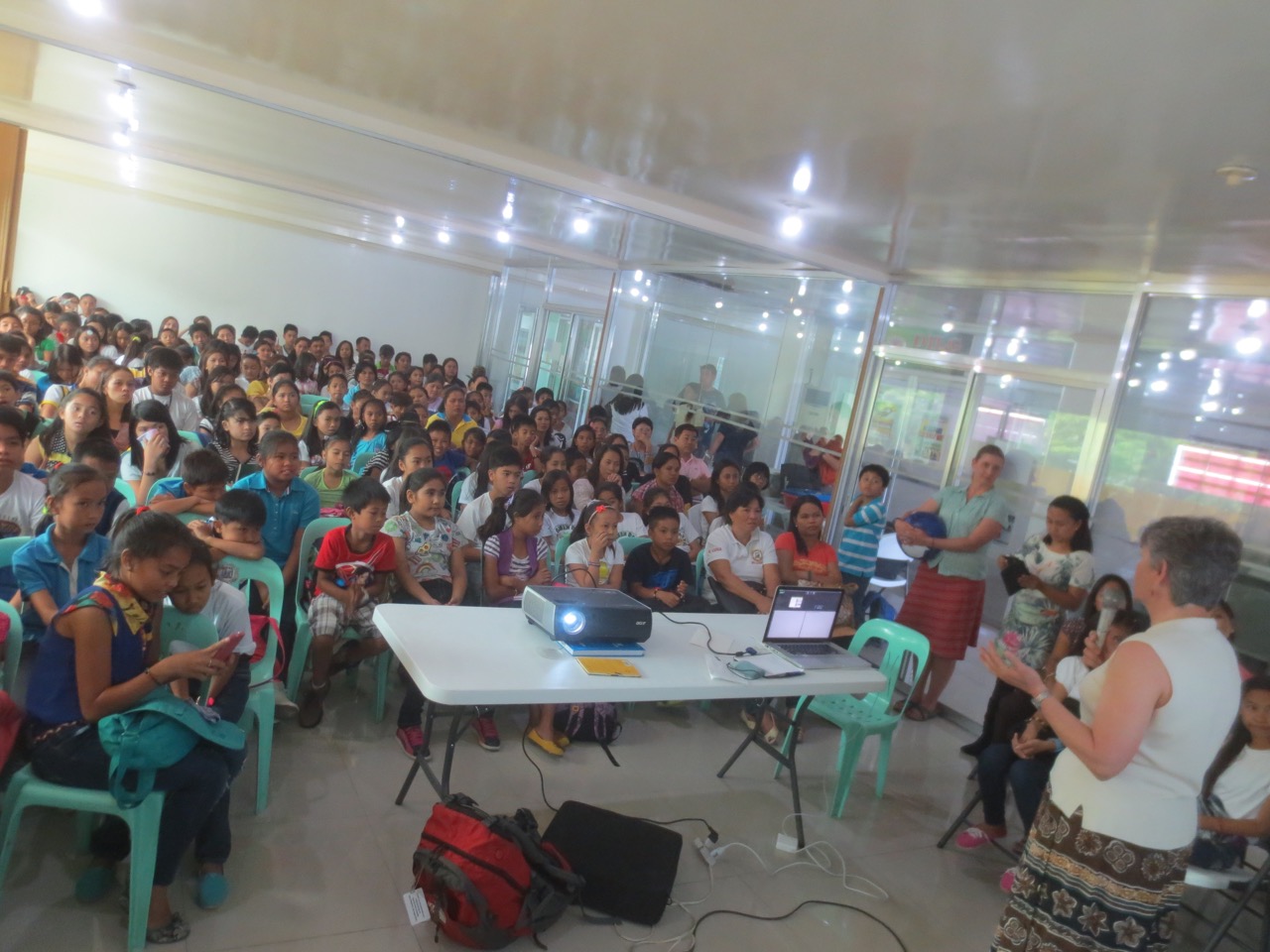 That said, it was exciting getting to reach so many people in one setting.

The star of the show was Kent Carpenter, an American scientist who coined the phrase that Verde Island Passage was "the center of the center of marine biodiversity in the world." Kent also spoke fluent Tagalog, which totally wowed the audience. 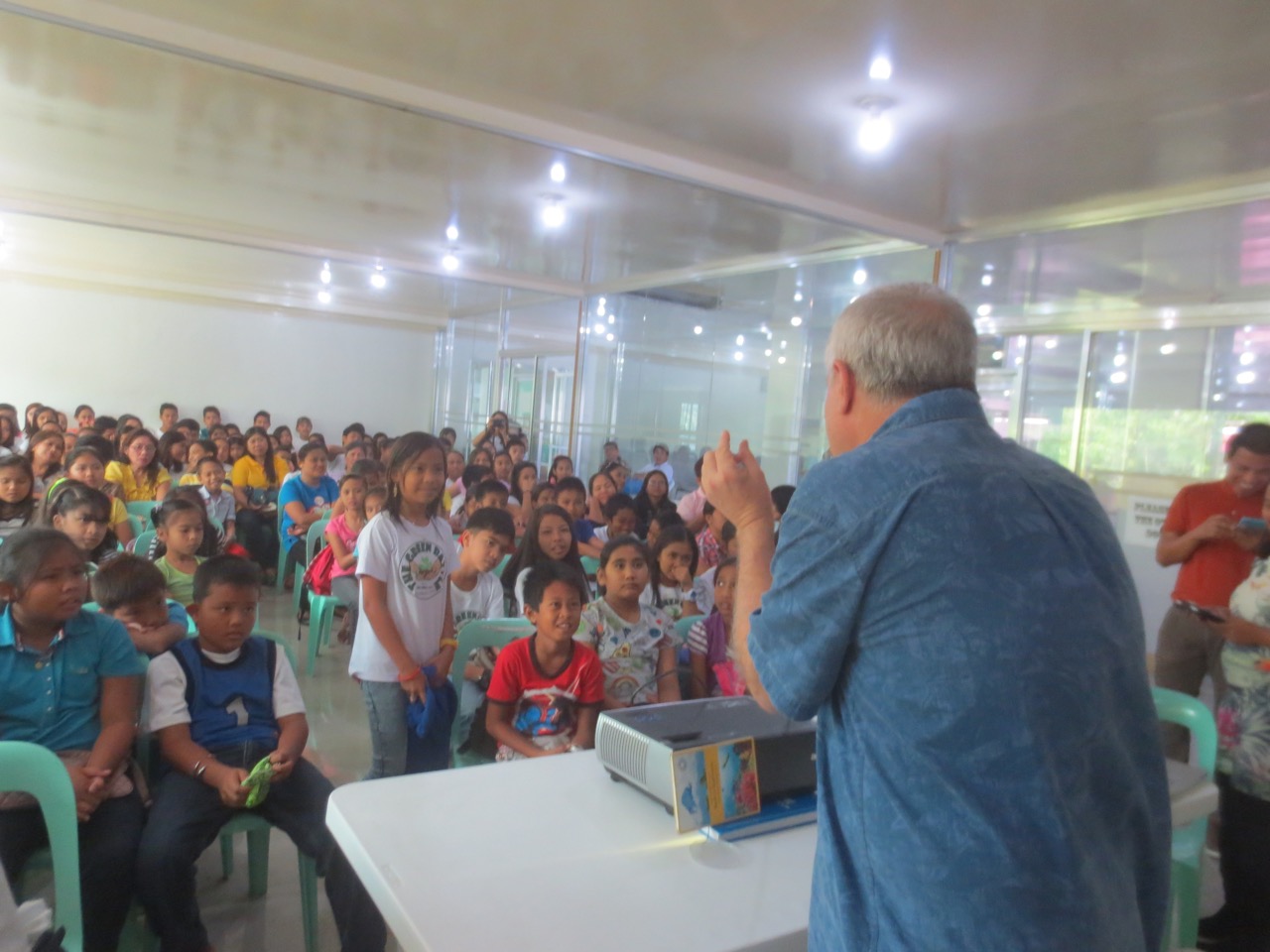 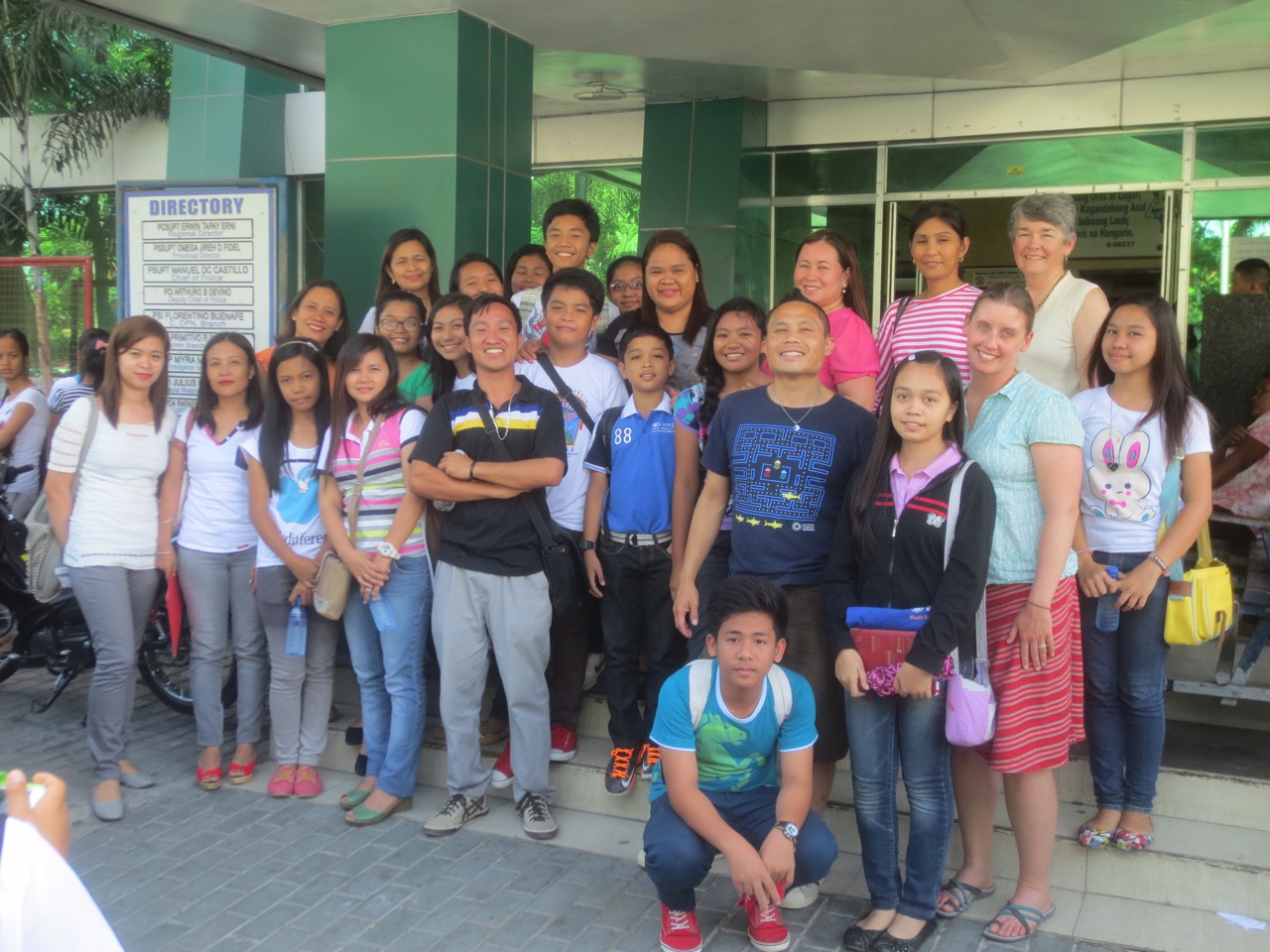 Our last community outreach was in the town of Lobo. Here's Meg greeting the mayor of Lobo, which was an important formality that Meg was supremely suited for. Pretty much everywhere we went, people were bustling to pose with pictures with "Dr. Meg." 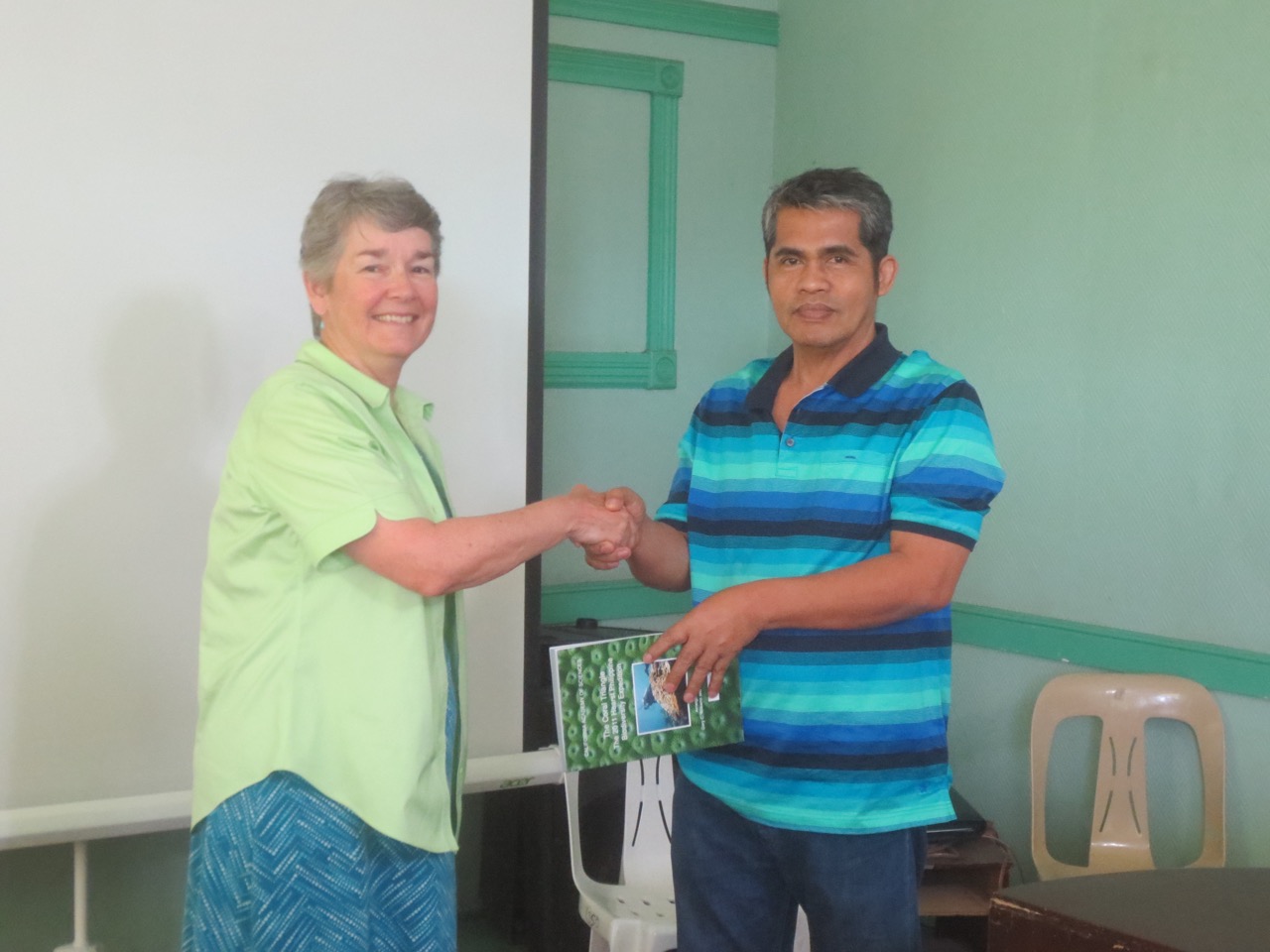 This setting was more intimate than the other outreaches we organized. And by this time, Lindzy and I felt pretty comfortable leading these talks and activities with our participants. As a result, I think this was perhaps our most successful outreach, even with a smaller audience.

We had a good number of fisherman in the audience. Talking with them about the challenges of fishing for your livelihood in the Philippines was really eye-opening. At the same time, they didn't have much knowledge of native marine life beyond what they sought to catch to bring to market. So much of our information about the biodiversity of the region was new to them. 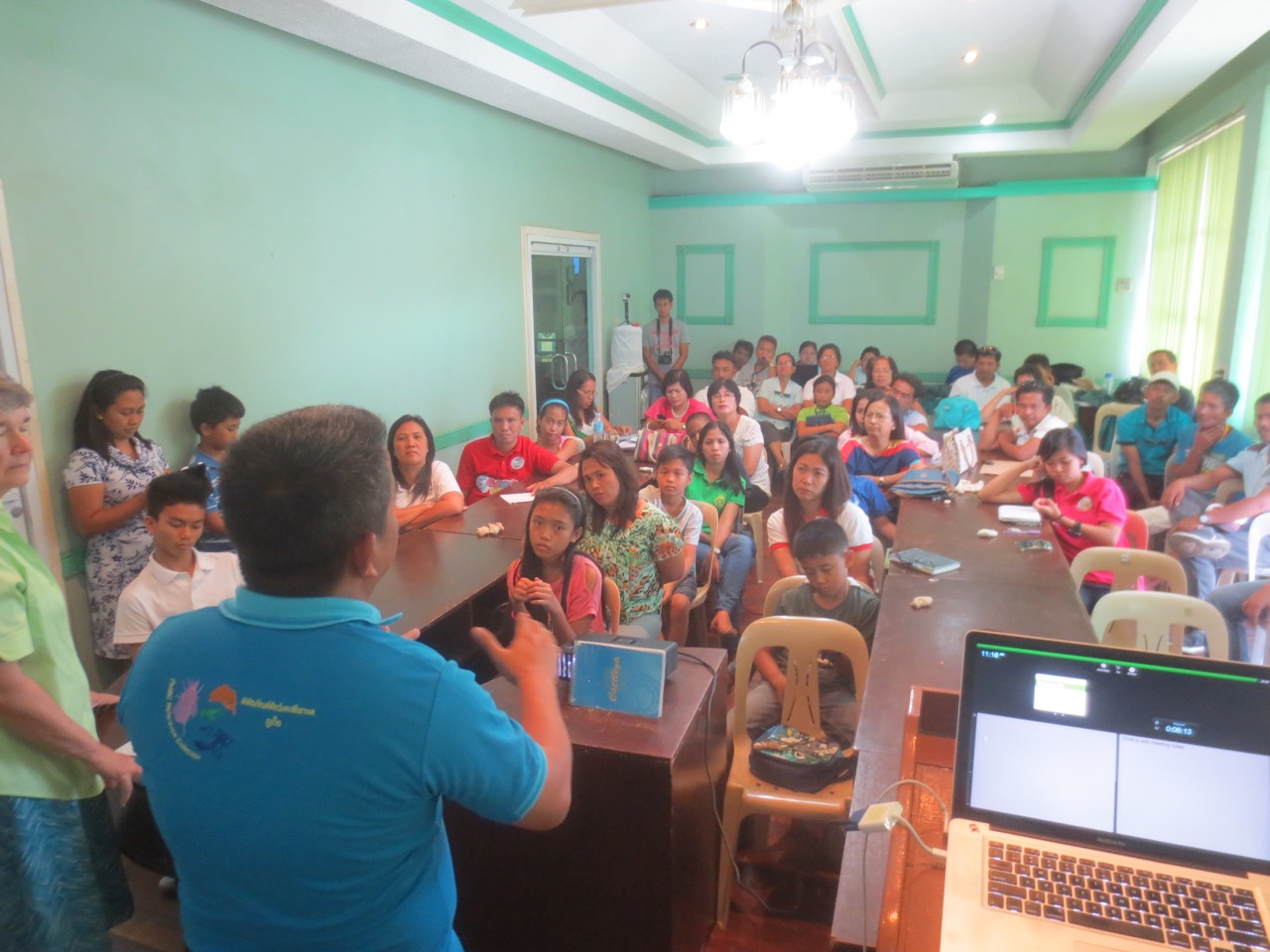 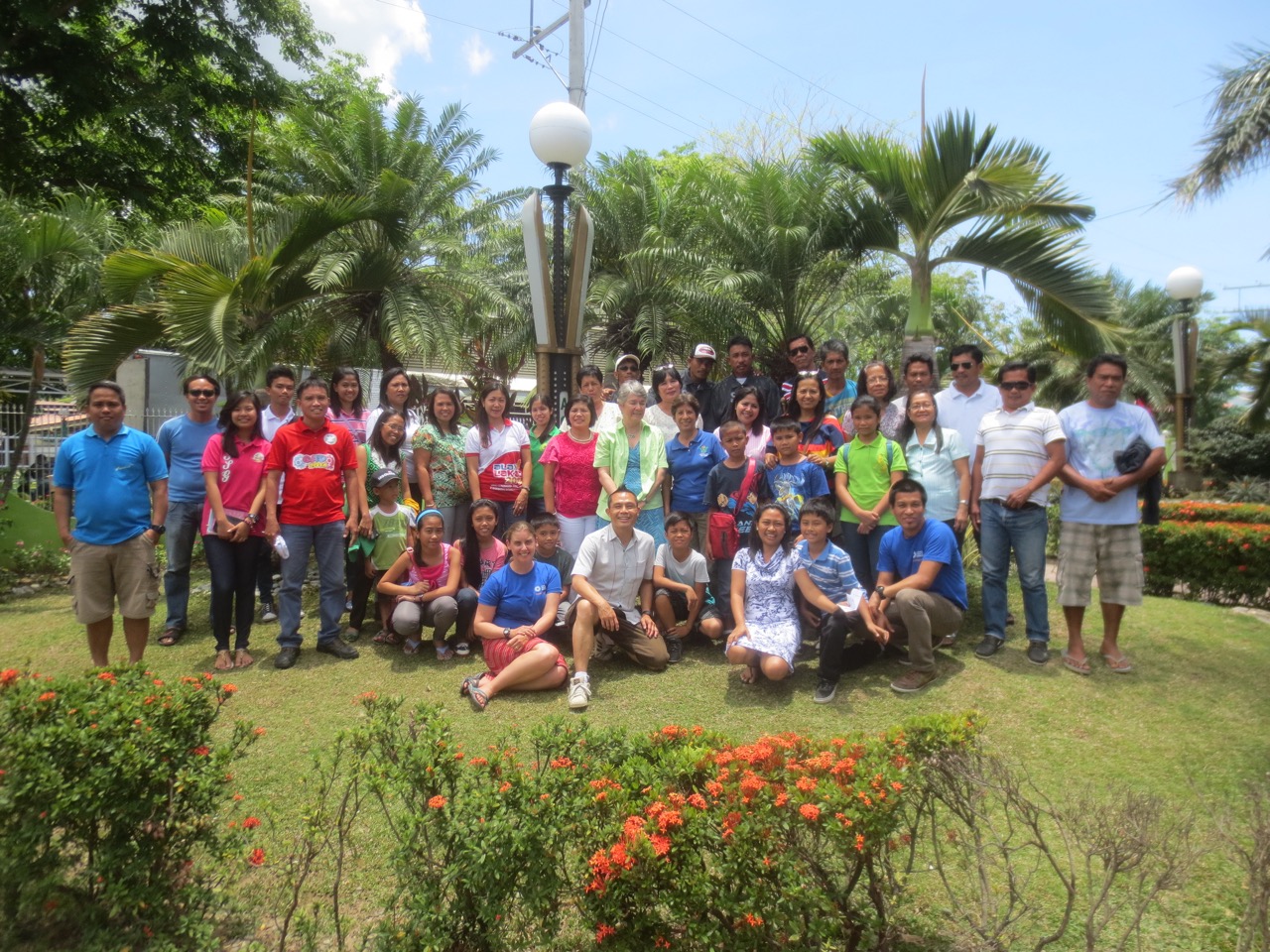 For me as a Filipino-American, conducting these community outreaches in the Philippines opened my eyes so much.

There's so much about the local biodiversity of the Philippines that apparently doesn't get taught to the people, which is a tragic shame. So few of them even get to explore their own local marine biodiversity because of a lack of swim instruction, access to equipment, and some cultural practices.

It's both awesome and sad that my colleagues and I could show up, put together a slide deck, grab some specimens by the local beach, and totally blow people's minds with what is found literally in their front yards. I wished that we could do much more and reach many more people.  My colleague Lindzy said she wanted to go back to the Philippines with a huge supply of snorkels and fins and help get people in the water and exploring their own coral reefs.

That said, the Philippines truly is the "Pearl of the Orient," a place of tremendous natural treasures and a people world-renowned for their humor, hospitality and love of life. Experiencing it first hand as a part of the Filipino diaspora was life-changing. The Philippines faces tremendous challenges — environmental, political, economic. But they have so much going for them as well.

If they can navigate a way through those challenges, it could lead the way for so many other countries in a similar boat. I'm so proud that I got to play a small part in helping them find their way. 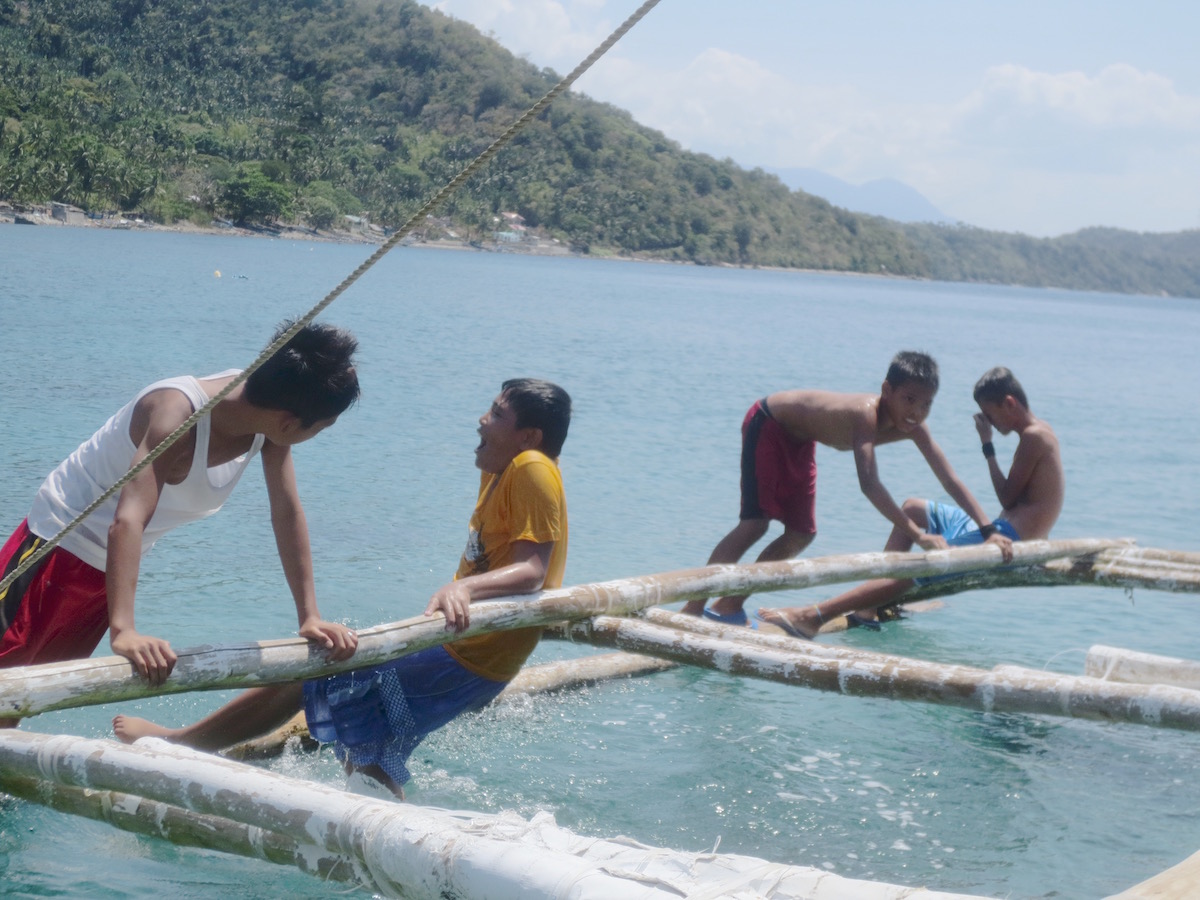 NOTE: You can read more about my adventures in the Philippines in 2015 here.