Sometimes I forget what a cool place I work. And then a lightsaber battle breaks out on the catwalk.

Every Thursday the California Academy of Sciences hold our Nightlife party — an adults-only celebration of science and culture with a different theme each night. Last Thursday was our "Feel the Force" Nightlife, one of our most popular. It's brings together droves of "Star Wars" fans for a weird mash-up of scifi fantasy and real world science exhibitions, shows, demos and performances.

As a big sci-fi nerd, I thought I should check out the festivities. Our planetarium was presenting a special show on exoplanets recently discovered around distant stars. African Hall was hosting fighting demonstrations by Jedi knights (and presumably some Sith lords.)  Entomologists had "Jedi ants" on display outside the project lab. Astromech droids rolled and beeped all around the museum floor. 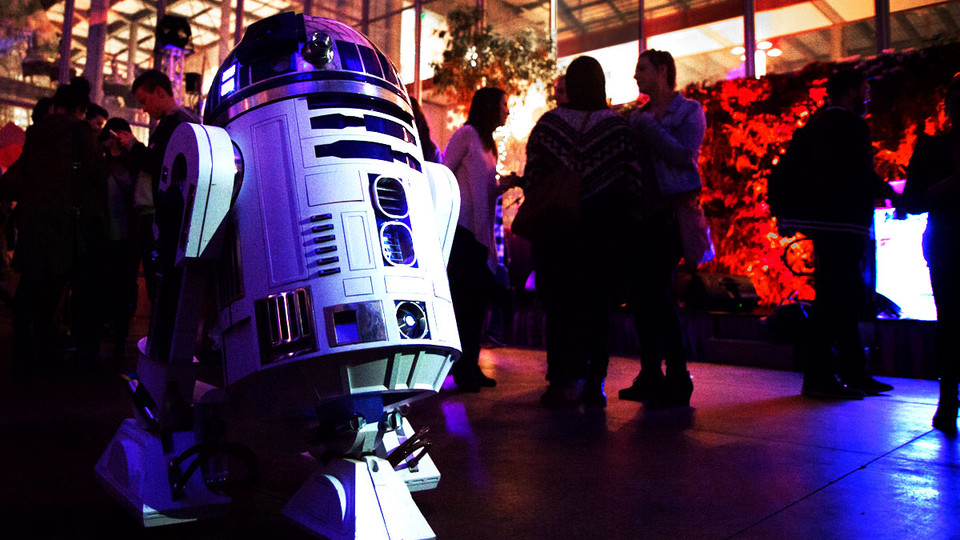 My main focus was in our central piazza, where Grammy-nominated DJ and multi-instrumentalist StarRo was performing. I didn't know much about him, but I liked a few of his older songs. A humble young musician, StarRo played keyboards and a mixer, accompanied by a bass player and drummer, for an appreciative and happy crowd.

There were lots of neat moments during the performance, but the highlight was toward the end of the evening when lots of amazing things came together at once.

In front of me, StarRo and his band were just killing it for the crowd.

Meanwhile, projected around us were videos from "The Empire Strikes Back" of snowspeeders and AT-AT walkers doing battle.

And up on the catwalk high above us, a Jedi and Darth Vader were fighting it out!

And then, to cap it all off, it began "snowing" inside the piazza — puffy bits of white, foamy "snow" cascading down all around the crowd and the band.

The snow, the funky music, the dueling star warriors, and the happy crowd just all came together for me in that perfect moment at the Cal Academy. I'm so lucky I get to work (and play) here.